First, I would like to thank my wife (who’s six months pregnant) for walking around Gangnam for about 20 minutes looking for Grill5Taco in the unforgiving Seoul humidity. Another rainy Sunday in the sultry summer of Seoul and there really isn’t much to do, besides stay in and eat or go shopping.

I was in the mood for Mexican. It was one of those mornings where you wake up, and nothing will be more satisfying in your world than the sweet tastes of pork stuffed into a tortilla, covered in sour cream. The wife was on board as well, as was my unborn spawn, so we cracked open the Lonely Planet to look for something new. Normally, we would head down to Itaewon, but we felt like exploring other parts of the city. Grill5Taco caught my eye and off we went.

Lonely Planet’s Description: “A business that started as a food truck has been so successful that it has a permanent base that caters perfectly to the on-the-go shoppers and hipsters mooching around Serosu-gil. The tacos filled with a choice of spare rib, spicy pork or spicy chicken hit the spot and if you are really hungry open your mouth very wide for the Monster Burrito.” (Sinsa-dong,Gangam-gu; taco from 7000K WON; Line 3 to Sinsa, Exit 8)

How to get there: Okay, first thing’s first, trying to find this place was a chore. We found the station and the exit no problem. However, there wasn’t much of a description on how to get to Grill5Taco after you left the exit. We went into a GS25 and tried to figure out the map. Unfortunately, it wasn’t much help; the map was microscopic and wasn’t full of details. So, we walked around for a bit, searching backstreets, alleys, and eventually we saw our red hat saviors! If you are having trouble, find these tourist information volunteers around Seoul, they are lifesavers! They gave us a detailed map of Gangnam and the surrounding area, and after that, it was easy to find. Now, if you can’t find the lovely ladies in the red hats, I’ll help you get there from the subway.

2) Walk straight until you pass the Tous Les Jours , and you will see on your left a makeup place called “MISSHA” and across the street, an IBK bank. This is called “Garosu-gil”. Ask around if you can’t find it, but it shouldn’t be that hard. On that street there are tons of shops, restaurants and cafes. Turn Left.

3) Now you are on Garosu-gil, which is one of the main shopping areas for hipsters and Korean socialites. Walk down the street, knowing that you will probably never fit into any of the clothes you see in the window, and get ready to eat your sorrows. It’s about a 5 – 10 minute walk, and you will pass a J.J. Republic, a “Belif” (whatever the hell that is) and a tall building called “Social Club.” Eventually you will see a “BeansBin” cafe on the corner. Make a left.

4) Once you turn left, you will pass a restaurant called Buccella Sandwich, and Noda Bowl. Keep going straight and you will see Grill5Taco on the corner, beside a cafe called “Cafe Jen”.

Grill5Taco looks like a cross between a disco and a Taco Bell. The techno beats are loud, and for a brief minute, as you walk in, you will feel like you are in a club. However, it has a open menu behind the counter like a Taco Bell or any other fast food place.  The decor looks as though it was designed by the Silver Surfer; on a sunny day it would be advisable to bring your sunglasses to avoid potential blindness. The place is clean, almost sterile, which is normally not the atmosphere I’m looking for when I’m heading out for Mexican. For me, a true Mexican restaurant should be like the casa of Momma Sanchez, who has been cooking from the same recipes that have been passed down for generations.  The feel of the place is chic, with lots of fashionable Koreans who look like they don’t normally eat burritos and the occasional foreigner who looks like they should be on the cover of GQ.

Okay, now for the main event. I decided to get the short rib burrito and some sweet potato fries. My wife decided to get the chicken burrito and the sweet potato fries as well. For the set, which included fries and a drink, the cost was 11000W each. Other items on the menu which looked appetizing were the  shrimp coconut tacos (2 for 7,300W) and the spicy pork (2 for 7,300W). If you wanted to sample all four, you could get the Four Star for 15000W. Like most Korean-Mexican fusion restaurants, their sides are what stands out. If you have ever been to a Vatos, and you’ve had their kimchi fries, Grill5Taco’s Seoul Fries are pretty much the same thing.  The Seoul fries are comprised of kimchi, Asian salsa (huh?), bulgogi, sour cream and cheese. The kimchi quesadilla looked great as well and would satisfy any Korean-Mexican fusion lover. Unfortunately, I didn’t see the “Monster Burrito” that the Lonely Planet suggested, which I would have tried had it been available. I asked about it, but the guy at the counter didn’t seem to know what I was talking about. I was more under the impression, based on the description in the Lonely Planet, that this was more of a traditional Mexican place. Instead, it is more of a Korean-Mexican fusion, which seems to be all the rage as Koreans return to the motherland from California.

Value: Eh? What can I say? 24k for a meal I could have gotten at Taco Bell doesn’t scream value. The burrito was the size of my hand or  about the size of a softball, and the fries were nothing to extraordinary, something you would find at a McD’s or any other fast food place. If I was in the neighborhood and felt like getting my groove on while munching on a quick bite, than I would probably head over there. However, there are better options out there, as close as right down the street!

Who should go there?

Single guys who are looking to impress their Korean girlfriends before heading to a dance club. 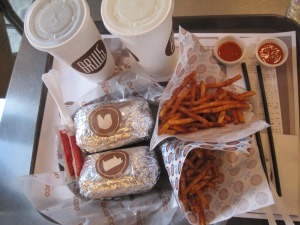 While we were looking for Grill5Taco, my wife and I stumbled across another Mexican restaurant in the area called, “Taco Chili Chili”. Now, when you think Mexican food, at least in the traditional sense, you think of a place like Taco Chili Chili. You might not notice it at first, but there is a chalk menu board outside the restaurant with prices. We decided to hold off on it at first, since we were both determined to find Grill5Taco. However, since we were both fairly unsatisfied from Grill5Taco, we decided to head down to Taco Chili Chili to compare.

How to get there: Okay, so if you are left unsatisfied from Grill5Taco, all you simply need to do to get there is to turn right out of Grill5Taco and head down the street passed the Wara Wara bar, for about 2 – 5 minutes and it will be on your right across from the Seoul Mode Fashion Institute.

From the subway, it is a little more complicated.

2) Walk straight until you pass the Tous Les Jours , and you will see on your left a makeup place called “MISSHA” and across the street an IBK bank. This is called “Garosu-gil”. Ask around, but it shouldn’t be that hard. On that street there are tons of shops, restaurants and cafes. Turn Left.

3) Now you don’t have to walk as far, only about 4 – 5 minutes. You will walk past a Starbucks and then make a left at the next street. On the corner should be a Cocobruni and across the street a 8ight Seconds (whatever that is). Make a left.

4) Walk down the street until you see a CU convenience store on your left. Make a right and it is a small restaurant on your right.

The first impression one gets when walking into Taco Chili Chili is that it is more like a traditional Mexican restaurant. A “mom and pop shop”, with simple decor and a homely atmosphere. The wood table and chair are align against the walls, which display Mexican flags and murals. The menu is on the table, with pictures and prices. Although, I’ve never been a big fan of menus with pictures, the menu added to the simplicity and casualness of the restaurant. Unlike most Western restaurants, but like a lot of Korean restaurants, the kitchen and the dining area are in the same room. You give your order to the waitress and she takes it up to the cook and he makes it 15 feet away from you. Another thing that I noticed was that the restaurant was the Spanish music playing, adding to the ambience of the restaurant. As well, Mexican beer is on the menu! There was a special: 6 coronas and nachos for 24000W. Alas, since my wife is pregnant, that would force me to drink all the beers myself, which I would love, but would feel terrible drinking in front of her.

As I said above, Mexican beer in on the menu. The beer is the usual suspects, the type you are used to seeing back home: Dos Equis, Sol, and Corona. My wife ordered nachos with guacamole and I had two chicken tacos with a Sol. One aspect that stood out for me was that you could customize your order. As tomatoes are my sworn food enemy, this was great. Now, sometimes I’m skeptical about custom orders, especially in a country where English is not the first language. However, I was pleasantly surprised when my order showed up just the way I ordered it. The service was quick, and I mean, super quick. I got my beer right away, along with my wife’s nachos. My chicken tacos showed up about five minutes later. Now, granted, there were only about eight or nine customers at the time, as opposed to Grill5Taco which was packed.  The taco was great, they didn’t skimp out on the chicken and it just had enough spice to tickle your tongue. Although it was a little heavy on the lettuce, possibly because I only ordered lettuce, cheese, and chicken. My wife’s nachos were good, nothing special, but she was happy they had guacamole and sour cream. The tacos ended up costing 10k and my wife’s nachos 6.5k, with the side of sour cream an extra 1k. The beer (cry) was 6k, but that’s the price you pay in Korea for Mexican beer or any other import.

Good value, but a little overpriced for the beers. I don’t know if I would be willing to go there and get wasted. However, I would go to Taco Chili Chili for a casual night out with the wife or friends. I plan to go back and try the burritos, and quesadillas. Other items on the menu for great value included hard tacos (3.5k), quesadillas (4.5k – 6.5k) and enchiladas (9k). Overall, this was a true (well as close to true as you can get in Seoul) casa Mexican cuisine experience. This is great, no frills, honest Mexican food, with no fusion. I look forward to heading back there for a Mexican fit after crying softly in the change rooms on Sureso-gil’s hip and trendy fashion boutiques.

Who should go there?

Families and couples looking for a casual restaurant with a comfortable atmosphere.

Anyone who doesn’t want to listen to god awful techno and actually enjoy a conversation. 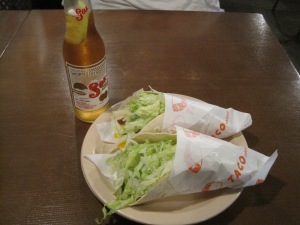