Day two in Mokpo began with a simple and cheap breakfast from the GS25 downstairs by the hotel.

Word of advice: There are not too many breakfast options in Mokpo that I saw, especially near the F1 Hotel. However, prepackaged and processed baked goods, a couple of cartons of chocolate milk and some OJ was satisfactory for us. We ate breakfast in bed, had showers and decided to flip through the Lonely Planet, to see what was shaking.

Alas, another rainy day in July (not that its unexpected, but still disappointing, much like the Chicago Cubs year-after-year). We decided we wanted to see some water and have lunch by the beach, so we hopped into a taxi and headed for “Beach Gallery”. We told the taxi driver to take us to “Yudal Beach” which is covered by the shadows of Yudal mountain. On the Lonely Planet map of Mokpo on page 222, it looks like it’s quite the haul from downtown Mokpo, but it only ended up costing us about 4k, basically because it was Sunday afternoon and there was no traffic. We get to Yudal beach, which is more like a plot of sand and find Beach Gallery right away. It’s closed. Okay, so, no big deal, we looked for the Old Man and the Sea instead. It didn’t take too much exploring. It was on the main strip, on the third floor. Now, one thing that might be a little confusing for a Westerner, is that Old Man and the Sea’s sign is written in Korean, but there is English there as well. If you look quick, you might not realize this is the place. As the Lonely Planet stated, there is a 7-11 below it, so just look for that and look up, and you’ll be able to find it.

Lonely Planet’s Description: Up the way is Old Man & the Sea (drinks 4000-9000W; 11:30am – late) a cafe/restaurant where you can watch the sun set from the top deck. If you’re expecting run there though, you’ll be sorely disappointed as Hemingway was when Death in the Afternoon was panned by critics. The 7-Eleven below has outdoor plastic chairs and is hugely popular with students looking for a quick, cheap soju hit.

How to get there: Don’t try to play around with this using any form of public transportation unless you’re a local. Seriously, just jump into a cab and say “Yudal Beach” or point to this: Yudal 비치 and they will know where to go.

First Impressions: We got there really early, probably just a few minutes after they opened up. There wasn’t anyone there. It was prime time to go to the back of the bar and steal some cheap liquor. I called out for someone a couple of times, and no one answered. Hum, okay. I’ll walk into the kitchen and the cook and the server were just chilling on their phones. They noticed me and the server bowed and apologized. She led my wife and I out to the deck overlooking the sea and handed us menus. The deck was pretty nice, open with solid tables and chairs. Inside was spacious, but several booths that had their own private dining spaces, that also had couches instead of chairs. I don’t always feel the couch situation, which is really popular in some spots in Korea. However, today, we wanted to breath in the fresh ocean air, which are lungs are so desperately robbed off while living in Seoul. In general, the place was comfortable and cozy. I would love to come back at night to see the atmosphere when things start to get lively.

Food and Drink: It was lunch time. The menu was quite extensive! Although the Lonely Planet was correct, you couldn’t get any rum, it was misleading, in that it was possible to get alcohol. In fact, there was a nice beer selection, along with whiskey and the usual Korean suspects (soju). So, if you wanted to get steamed, while singing old fisherman ballads to the China Sea, as I’m sure Hemingway was fond of, it is possible (so avoid the 7/11 “soju hit”). The beer menu included a nice list of imports, such as Guinness, Budweiser and Miller Genuine Draft. So, if you aren’t feeling Cass or Hite, the option is there besides Korean brew. My wife wasn’t too hunger (the baby was being picky), but I was starving, so I ordered a nice plate of brown (chicken wings, chicken strips and fries), while my wife had a milkshake. The portions were great, nicely cooked and not overly spicy, but still had flavor. The wife was very impressed with her milkshake, and claimed it was probably one of the best she’s ever had in Asia.

Value:  The final bill came to 40k, which included three beers, chicken wings, fries and a milkshake. However, the atmosphere and the view was great, even though it was another gray day from a weather perspective. It was still nice to see the ocean, especially when you have been trapped inside the baking oven known as Seoul. I would recommend it highly for travelers who are visiting the area, and when I return to Mokpo, I plan to make it one of my stops; but next time it will be during the evening when the sun is going down. My own qualm with the restaurant, and this is completely out of their hands, is that there were a bunch of smokers who showed up which forced us inside. Hemingway would probably love the bar named after his masterpiece, as he famously would say, “Always do sober what you said you’d do drunk. That will teach you to keep your mouth shut.” Words to live by.

It doesn’t look like it, but that does say “The Old Man and the Sea” 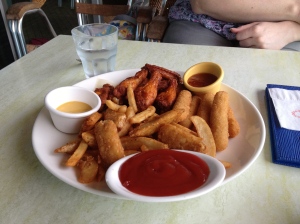