Baby Guinness and I go way back. My wife and I stumbled across it a couple of years ago when we got sick of the restaurants on the main strip of Itaewon and decided to hit the string of dining establishments behind the Hamilton Hotel. Once we found Baby Guinness, it was like falling in love all over again with Irish fare. Not only is the food great, but the Guinness on tap is properly poured, and if you are feeling adventurous, comes in a variety of styles and combinations. 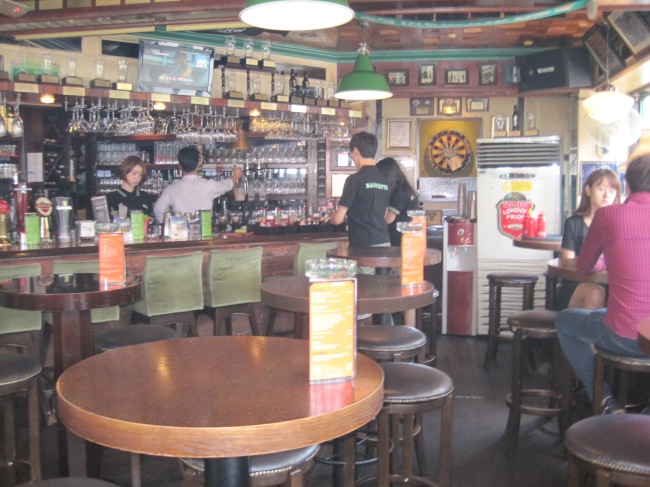 The open layout of Baby Guinness is key. In the spring and autumn, there is a nice cross breeze which creates a relaxing atmosphere, as though you are enjoying pints off the hills of Ireland.

How to get there: Surprisingly Baby Guinness is not too difficult to find among the countless English pubs in Itaewon, but you have to look for it. It won’t pop out at you, or catch your eye. Ohh.. but it’s there.

Take Itaewon (Line 6) and leave from Exit 2. Make the first right you see into one of Itaewon’s dark and seedy alleyways and walk up the slight hill. Once you are through the alleyway, make a left. You are now on the road behind the Hamilton Hotel. Keep walking, you should see a Greek restaurant on your left and Brazilian BBQ restaurant on your left as well. Baby Guinness is on the second and third floors.

Atmosphere: Baby Guinness is a versatile restaurant, with an ever-changing atmospheres. In the day, it is probably one of the best places to rest, grab a pint and some pub food, open up the windows and watch the hours tick away over some good conversation. At night though, it gets lively with the occasional Irish song and dance. As well, there are pub games upstairs, and everyone is really friendly, and game for a laugh. Both atmospheres make Baby Guinness special. The tables are quite close, however it doesn’t feel stuffy. If anything it feels more intimate and thus, makes for easy conversation starters. There is a nice combination of people. It’s not a place that is jammed packed with foreigners, nor does it totally cater to Koreans. A few times we have been there, we’ve heard German, Italian, English and Korean all mixed together. This diverse crowd is what makes Baby Guinness special.

Food and Drink: On this particular visit, we arrived pretty early around 12pm, so we weren’t in the mood for anything too heavy. I decided to get the fish and chips, and my wife got the chicken tenders with fries. My normal plate, usually for dinner, is the Guinness stew, but it was too hot and heavy for that, so I went with something lighter. My wife always gets the chicken tenders. Another great item is the Shepherd’s Pie, which is a little small, but makes up for in flavor. In Korea, its about as authentic of a Shepherd’s Pie you are going to have. Of course, had to get a couple of Guinness. 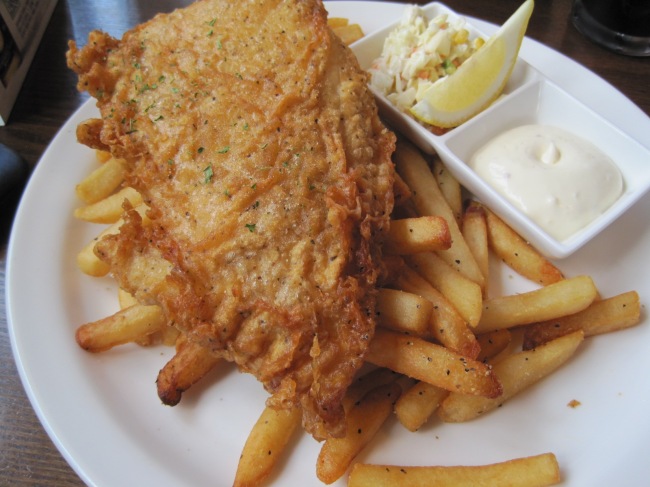 Lightly battered and seasoned, but fluffy and not greasy. Excellent fish and chips. 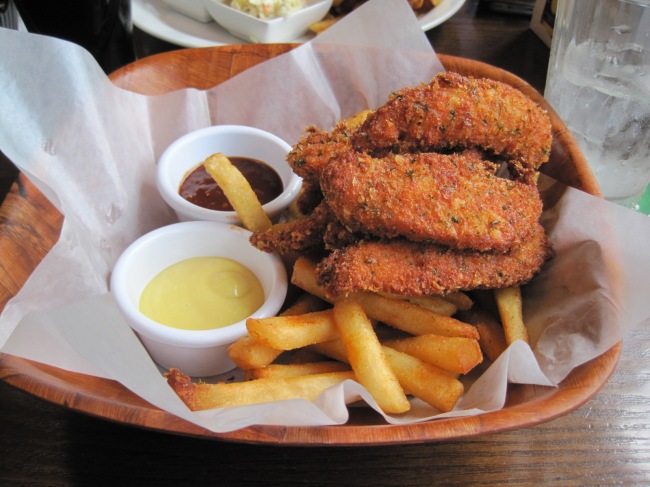 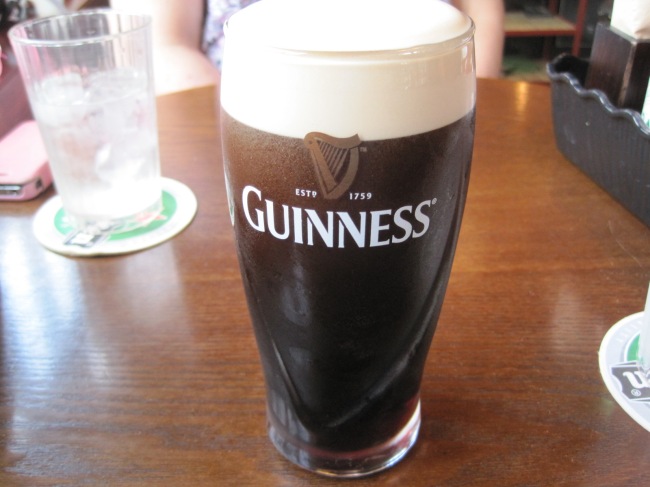 The namesake of the pub.

The fish and chips were fantastic. I’m not much of a seafood guy, but I do enjoy fish and chips on an occasional basis. What stood out though, is that there was hardly any grease on the fish and chips. The seasoning was little, which is how it’s suppose to be! I hate some food bloggers who complain that fish and chips are bland. Have you ever been to fucking England dumbass?? It’s suppose to be bland! Actually, there was a little seasoning, but not enough to take away from the flavor of the fish. The chicken tenders were great, both cooked and seasoned perfectly. Baby Guinness fries are seasoned well, with a hint of paprika. The guinness was well poured, but lacked the shamrock on the top. Alas, it was early so I’ll let it go.

Remember when I said that you can get Guinness in a variety of combinations? I tried one of these out. It was combination of Guinness and Corona, called a San Patricios. I was skeptical at first, but the combination was actually pretty refreshing. The light flavor of the Corona and the bitterness of the Guinness actually complimented each other quite well. 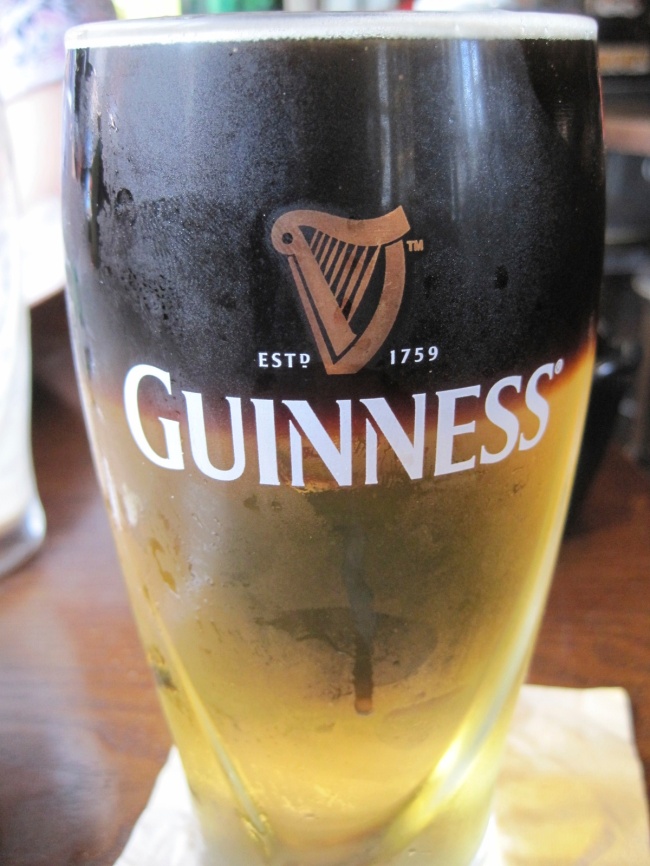 A San Patricios: an interracial marriage of Ireland and Mexico.

Value: Baby Guinness can be on the pricey side, so if you aren’t looking to spend a lot of cash, there are other options out there. However, if you want some nice pub food, I would go the extra WON. The fish and chips were 14000WON and the chicken tenders were 12000WON. The Guinness was 10000WON and the San Patricios was 12000WON. The draft beers ranged from 6000WON – 10500WON, bottled beers ranged from 6000WON (Budweiser, Krombacher) to 10000WON (New Castle Brown Ale), shots were 7000WON and if you really want to dance with death, bombs ranged from 10000WON – 15000WON. Try the Gernade bomb, that was 15000WON, I was too much of a pussy to try it. So toss a gernade back and let me know how it was.

Who should go to Baby Guinness: One of the only places in Itaewon that is a nice balance between cozy and comforting, but exciting and lively. Thus, it appeals to a variety of restaurant connoisseurs. People in need of some great pub food, particularly of the Irish variety and some good Guinness that can come in various combinations should venture to Baby Guinness. Also, customers who are looking for a variety of brew options and a game of darts against a drunk Irishman, or a very skilled Korean should pop by.

Who should avoid Baby Guinness: As good as Baby Guinness can be,  it can be a bit on the pricey side. After a few Guinnesses, some food and a couple of shots, the bill can climb quicker than an adjuma up Dobangsan mountain. Also, guys looking to get laid. I’ve never got the feeling this was a place to pick up at, but you never know! Good luck lads!