So this is my first time reviewing a restaurant that was strictly Korean, so if there is some translation errors, let me know by commenting below.

Last weekend, the wife and I head to the Filipino market in Hyewha. As I’ve said before, Hyehwa is one of the more vibrant pockets of the city that gets absolutely no attention. Hyehwa is like a middle child music prodigy, who is stuck between her older brother who is a doctor and a younger sister who is an actress. The 7th edition of the Lonely Planet, gives Hyehwa a little attention, but not nearly the amount as other parts of the city. I guess that’s fine, as I feel each neighborhood in any city has their own hidden gems. After getting some cheap meat at the Filipino market, we decided to walk around for a bit, and eventually stumbled on this little BBQ joint outside of exit 4.

How to get there: Not an easy find, but have a little patience (trust me it will pay off). Head out exit 4 at Hyehwa station (Line 4) and turn left. You will see one of the main alleyways, which if you are interested, has a Hello Kitty cafe! Walk about two alleys past the Hello Kitty cafe and make a left. You will find a couple of small bars, but 하루방 되고기 will be on your right. It pretty much dominates the alley, but at the same time, is hidden amongst the small bars and pubs in that area. Look for the sign below hanging out in the front. 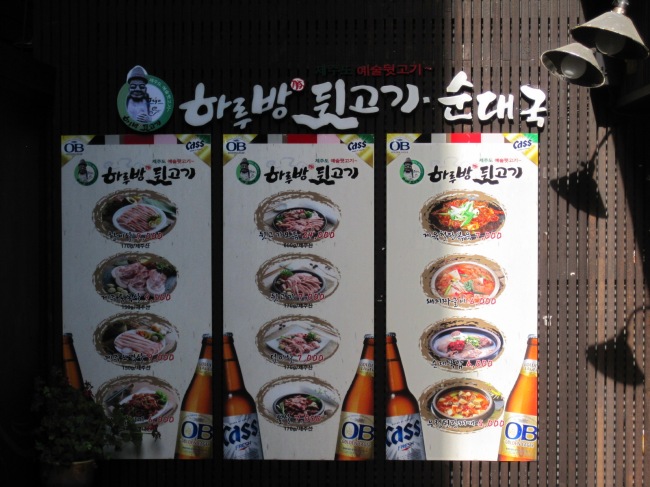 Service and Atmosphere: One of the reasons I’m writing about this place is because the service was exceptional and the atmosphere was very relaxing. Normally, when Westerners head to a Korean restaurant, there can be some… let’s say.. apprehension among the staff about who should serve the foreigners. However, the woman who served us was really friendly, patient and warm. She went through the menu and even took my IPHONE and helped me translate some of the menu. She had a great smile and attitude. It was an awesome (and sometimes rare) experience found in a neighborhood restaurant. Although we were the only two people in the restaurant, since it was a Sunday afternoon, it had an open feel. It’s long, narrow wooden hallway had a rustic appeal as we sat down to order. It felt like I was eating BBQ in a cabin up in the mountains of Gangwon-do. 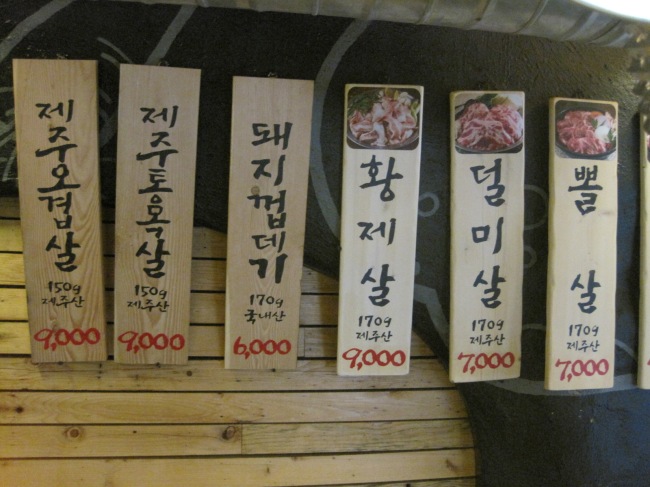 Food and Drink: We decided to get the 뽈살 (bol-sal), which is a medium cut of beef. We ordered two, which for my wife, the munchkin and I turned out to be pretty filling. It wasn’t too fatty, but it did have some excess fat that we trimmed off. You needed a little more salt and oil with this, as it is not seasoned like Dwejigalbi, so I would suggest asking the server for an extra bowl of salt and oil. The sides were pretty standard: two orders of kimchi, that weird ginger salad, and the super spicy salad. It was okay, but nothing special. I really enjoy the restaurants that give you a little something extra like quail eggs, makes BBQ a little more diverse. Finally, we ordered 순대국밥 (Sun-dae-guk-bap) which, if Google translate is correct, translates into “Measly Soup”. However, there wasn’t really anything measly about it. It was a full serving of soup, with a variety of meats including sausages, seafood and a variety of veggies. I found when I put my rice in, it turned into more of a stew. Normally, I’m pretty hesitant of Korean soups because I’m not a huge fan of spice, but this soup had a nice range of flavor, without being too spicy. I’m looking forward to consuming gallons of this stuff when the cold, bitch of a winter hits. It will be perfect on a cold evening.

Value: Two orders of bol-sal, one order of “measly soup”, two bowls of rice and a couple of sodas came out to 21000KRW. Pretty nice value for an honest, hearty meal in a vibrant part of town. I loved the atmosphere (quiet and rustic) on a Sunday afternoon, and the service was exceptional.

Who Should Visit Harubang Dwegogi: Need a quick, and cheap BBQ hit to last you until your next craving? Check this place out. Foreigners who might be a little intimidated with their first BBQ experience will have a great time here as the service was exceptional, and the food and prices are clearly marked on the wall.

Who Should avoid Harubang Dwegogi: Not the most fancy of BBQ places in Hyehwa. If you are looking to impress a date, I would probably take her to another place in the area. Also, if you need food NOW, this place can be a little tricky to find. There are other alternatives near the station exits.