Two Broz. in Itaewon – A Quick and Satisfying Bite

Itaewon aka America Town has all the fast food options associated with the good ole USA. The colonel, the clown and the chihuahua are all there ready to serve you with the dirty pleasures from home. That said, up the hill is a small burger joint called “Two Broz.”, who make their burgers fresh to order, but in a timely manner. If in doubt, Two Broz. is my go-to place for a juicy burger, some crispy fries and free soda (not beer) refills.

How to get there: From Itaewon station (Line 6) head out Exit 3 and walk straight. You will pass the first intersection (aka Hooker Hill) and begin to walk up a small incline. The whole walk will take only about five minutes and Two Broz. is on your right. 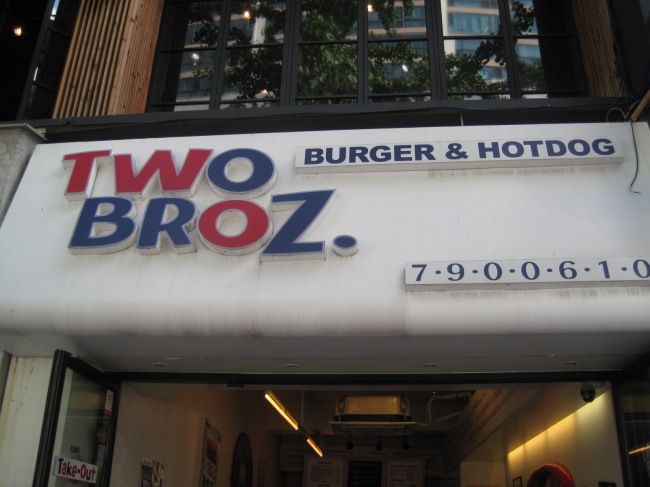 Atmosphere and Service: One aspect which is appealing about Two Broz. is the large glass doors which slide open to let some fresh air in during the summer. Also, people watch in Itaewon is a bit of a sport. Some games include: Spot the Hooker, Is that an Arranged Marriage? and Korean Celebrity Spotting. My favorites are games one and two. The two guys who were running the place spoke good English (like most servers in Itaewon) and were working hard the whole time. When I went up to the counter to place my order, they were preparing the fresh burger patties, a thing of beauty to watch. They add some spices, place it in a giant mixing bowl, and size out generously portioned servings. The music is mostly rap of some kind, either Korean or Western, and the decor is a simple setup of wooden chairs and tables. It’s clean and comfortable, not much more you can ask for. The main appeal is the speed. Two Broz. arguably make the freshest, fastest burgers I have ever seen. They really hammer it out. I had my burger and chili fries ready in about 15 minutes, which makes this an excellent place for lunch, or if you are short on time. 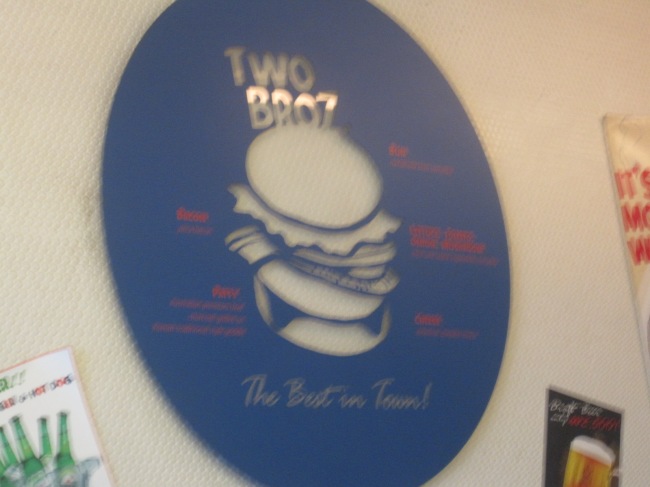 The table right by the window. Front row seats for people watching in Itaewon. Ahh, who needs cable?

Food and Drink: I ordered the bacon cheeseburger (9000KRW), chili fries (7000KRW) and a Coke (service!). The burger was medium-sized, nothing overwhelming which is going to put you into a meat coma. The burger was perfectly cooked. Although it was well done, it still had plenty of juices, which dropped slowly off my fingers and onto the plate. The veggies were stacked nicely, not too high that I had to dislocate my jaw to get the burger in my mouth. The burger had fresh, crisp lettuce, and the onions were crunchy. I’m not a big onion guys, and I don’t like my burger overwhelmed with onions, but there was a balance between all the veggies, and not one flavor dominating the other. The sauce was a mixture of mustard and mayo. An interesting combination. The mayo balanced out the tartness of the mustard, and added some creaminess to the burger. I added a little bit of ketchup, because I’m a ketchup junkie, which might be a faux pas for some, but I found that it didn’t take away from the flavor of the mustardayo. The burger had a couple of strips of bacon, none of the strips were burnt. Finally, the bun was soft, and warm to the touch.

I was skeptical about the mayo and mustard mix, but it was actually a really nice combination.

Chili Cheese Fries: The chili cheese fries are good, but not great. The fries are store bought, which is surprising because the burgers are homemade and cooked to perfection. That said, the fries are not terrible by any stretch of the imagination, but it would be more appealing for 7000KRW if they were fresh cut fries. The chili is spicy, especially for Western standards. On the Kimchi scale, it is slight above the spice level of Kimchi. The cheese was fresh, and the chopped onions on top were crunchy like the burger. The fries would have a little more value if they had more meat in their chili. It felt as though the chili fries were more like cheese fries, with a spicy sauce and onions. 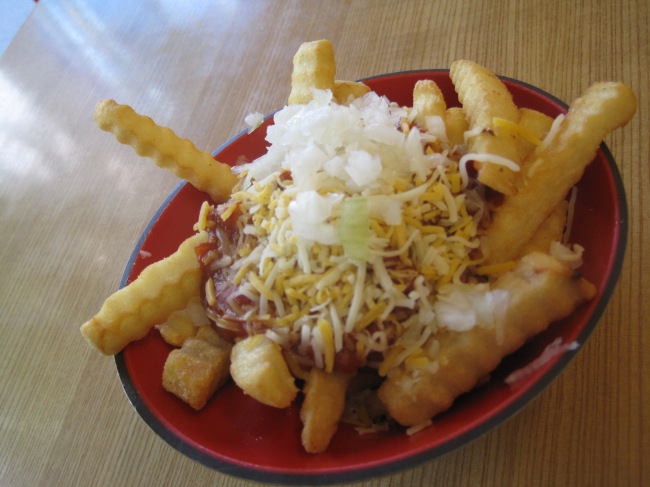 Hello meat?? Where are you?

Drinks: Dining in, it appears as though there are free refills of soda. However, like most Korea places they have beer as well! The normal suspects are on tap: Cass and Hite, but there is also Hoegaarden in bottle form. Since I had to teach, I decided it was best to forgo a beer. Later while teaching, I wish I had the beer…

Value: Two Broz. is not a great value, but a fair value. For a lunch or a quick bite to eat in the Twan, this is probably your best bet burger wise. The 9000KRW for the bacon cheeseburger was worth every WON, but next time I will probably pass on the chili fries at 7000KRW and just get a regular fry (4500KRW). As I said in the introduction, Two Broz. is quickly becoming a staple on the main strip of Itaewon, with good reason.

Who should go to Two Broz.: People watching, drinking beer and watching the interesting “characters” of Itaewon walk up and down the street, and great burgers. If you like any of these things, you should check out Two Broz. Also, if you are in a hurry and want a quick and satisfying bite, this place is for you.

Who should avoid Two Broz.: Not exactly a place I would take a date on the main strip. Also, some of the music might be offensive to impressional ears (earmuffs!).