I had the opportunity to finally visit Left Coast Artisan Burger in Itaewon. LCA is the new burger joint on the block, and is a popular favorite amongst the Seoul Burger Lovers community. After trying their Juicy Lucy burger, they clearly deserve the accolades bestowed onto them.

How to get there: The easiest way to get there is to take the subway to Itaewon Station (Line 6) and depart from Exit 4. Now, you need to spin around and find the Taco Bell. You should be on the opposite side of the street as the Taco Bell. Now start walking away from the main strip. In about 150 meters, Left Coast Artisan will be on your right, second story up.

Atmosphere and Service: Left Coast eh? I’m from the right coast and it is rare that when you walk into a burger restaurant that you hear the soothing sounds of Bob Marley. The atmosphere is very “Cali”, in that, it has a chilled out, beach-like atmosphere. The staff really reflects this laid-back but not lazy attitude. After my meal, I just relaxed for awhile, listened to the music, wrote down some points and basically watched the world go by. Did they come and talk to me? No. Did they pressure me to pay the bill? Hell no! Did I have to pay for my food first! Absolutely not. The server simple came up after she took the food away and said, “Whenever you are ready, we’ll take care of the bill.” Thank you LCA! Other restaurants in Itaewon *cough* Prost *cough*, please take note of this.

A simple decor reflects the relaxed atmosphere of the place. Pictures on the wall of the great cities in California, including one of my favorite cities in the world, San Francisco (Go niners!). A couple of booths, and of course some stools and a counter. One aspect I loved was that the customer can view the kitchen. During my visit, the chefs in the kitchen always seemed to be working, including shaping their patties from fresh beef. A small and simple bar with a nice selection of brews adds to the “Cali” feel. A very nice, relaxing atmosphere, all it needed were some hippies, a campfire, a beach and some special brownies 😉 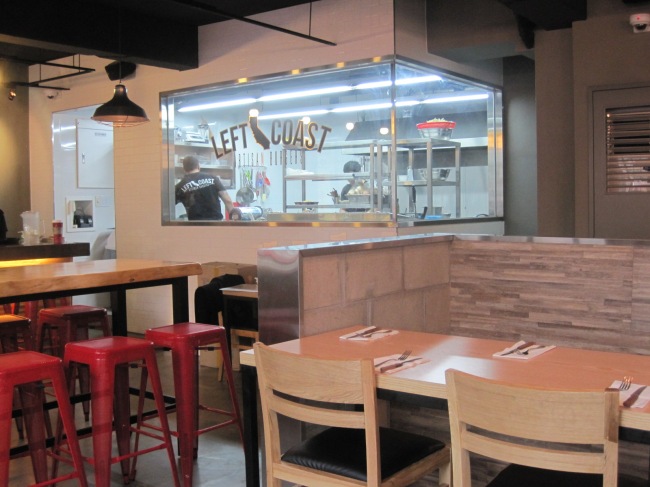 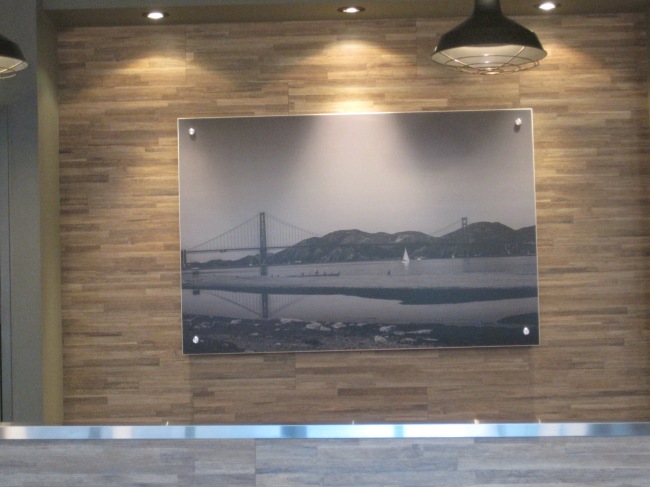 Food and Drink: I ordered the Juicy Lucy, Napoleon’s homemade tater tots, a Coke and a Lost Coast Great White beer. My takeout order included the Mac and Cheese and the All American sliders.

Overall, a very delightful burger. Let’s start with the bun. The bun was freshly baked. There was no staleness, nothing fancy, just an honest, well baked hamburger bun. A good bun is one of the keys to a great burger. The bun is basically the first impression you receive when the burger is presented to you and in this case, it was an excellent first impression. The sautéed onions were a little much. The flavor was alright, but it seemed to overwhelm the rest of the burger. I was trying to taste the special sauce, but the onions overpowered the sauce. In fairness, the Juicy Lucy is not exactly the cleanest burger in the world, so I can’t be too critical. The meat was cooked perfectly, and held all of its flavor. The cheese was excellent. The cheese is so critical in a Juicy Lucy. A few times I’ve had a Juicy Lucy and the cheese squirts out on to your hand like napalm. But in this case, the cheesy oozed out, nice and slowly. It’s a fantastic feeling not having to suffer 3rd degree burns when consuming meat. The small side order of pesto pasta salad with onions was a nice little compliment to the burger. It’s the little things that make a burger place special, and having a little appetizer like that will really help charm the customers.

Its been awhile since I’ve had some tater tots, but it was such a unique menu item that I had to order it. I’m so sick of fries. My first impression was the size and the color. The tots were a nice golden brown and were a fair size. They also came with ketchup and a dill dipping sauce. The dill dipping sauce was amazing, a really nice unique flavor for tater tots. My only criticism was that they fell apart way too easily. They were a little moist, and not as crispy as I would have hoped. That said, the flavor was there, even though it required a little more work. 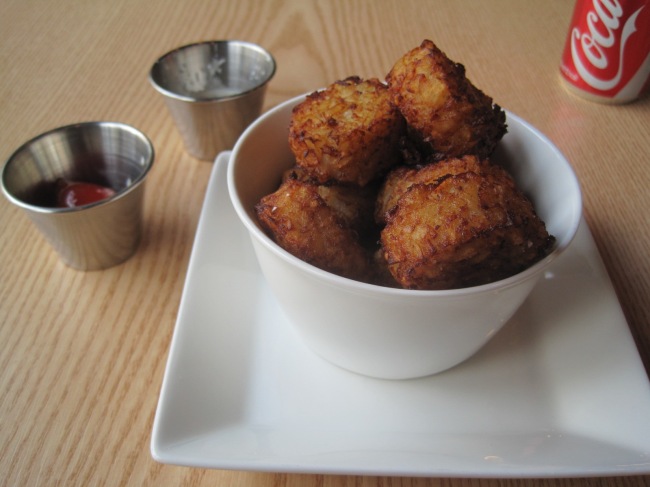 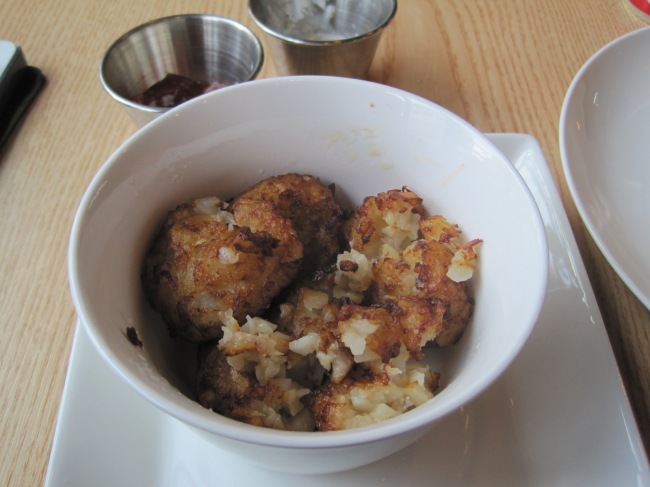 Considering it was an hour long ride from grill to home, they retained their flavor, even though they might not look like it.

I really wanted my wife to try this place out, so I took an order out for her to go. Now, considering it was a solid hour on the subway, the burgers really held up well. The only thing that my wife said that didn’t survive the trip was the lettuce, which was too soggy after the long subway ride home. However, the onions, beef patties and the cheese all were great.

The Mac and Cheese was the second item I had to go. Overall, it held up during the long subway ride home. My wife said the cheese was awesome. Plenty of cheese which was nice and fresh. The macaroni was a little disappointing because it was really small. Our preference is for large piece of macaroni pasta which fills out. These macaroni was a little small and lifeless. Also, besides the cheese there wasn’t much flavor. Maybe a little more pepper or some dry mustard would give the cheese a little flavor. That said, overall it was satisfying dish and she would order it again, but this time at the restaurant. 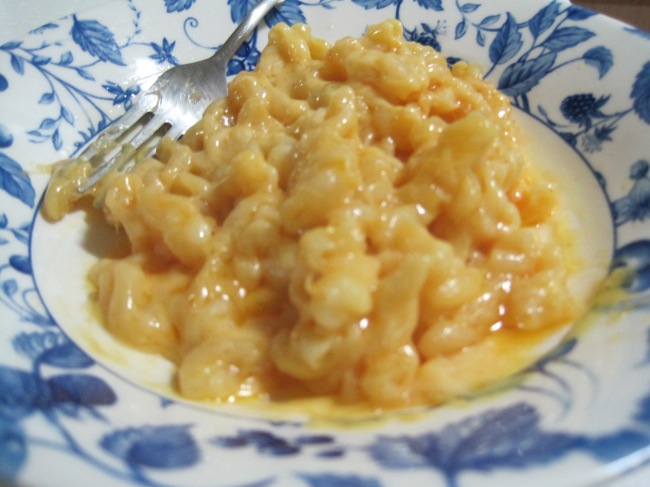 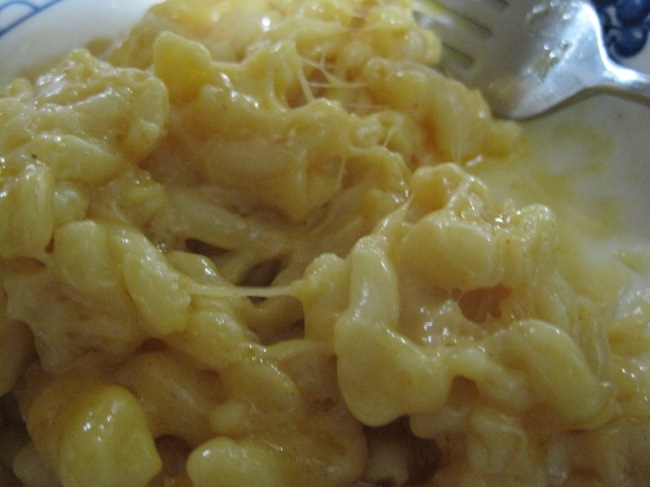 Drinks: I love what they have on tap. I’m becoming a big fan of the Lost Coast brews. The Great White and the Indica IPA are a couple of my favorites and it’s great to see these drinks on tap around Seoul. There are also mixed drinks including something called “Good Time” Lemonade (that sounds like fun) and of course Sangaria. 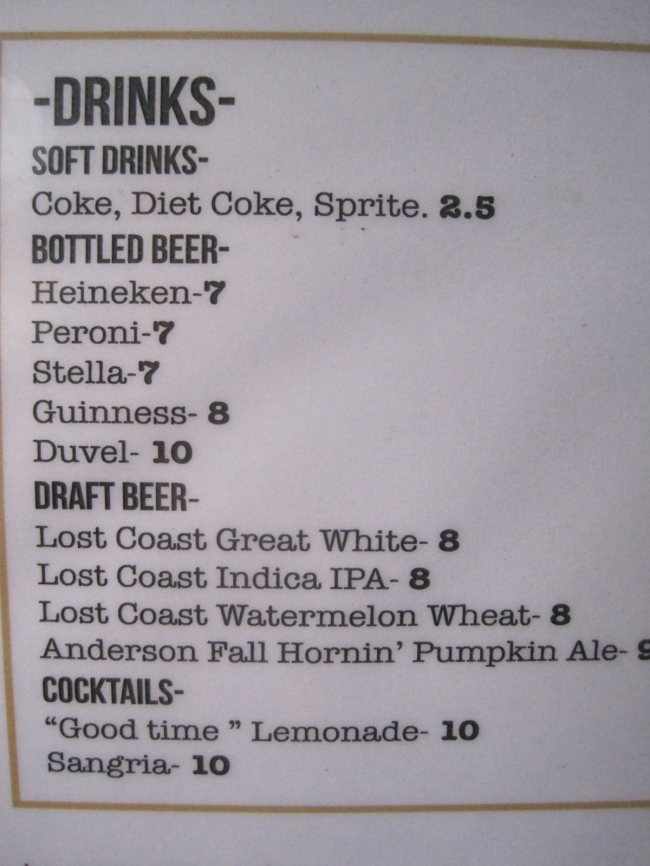 Food and Drink TL:DR: Juicy Lucy = awesome, but the onions a little overwhelming. Tater tots = great flavor, but fell apart fairly easily. Mac and Cheese (to go) = very cheesy, but lacking in flavor. All American Sliders (to go) = Retained their flavor over a long trip, but the lettuce was pretty soggy (to be expected).

Value: As far as value is concerned the Juicy Lucy at 14000KRW was a good value. The quantity and the quality make it a great purchase. The tater tots at 5000KRW were a fair price too considering you will probably pay at least 4000KRW – 6000KRW for decent fries anyway. The Mac and Cheese at 6000KRW would be an excellent value if there was a little more. I was a little disappointed at the quantity, but the taste was fine. The sliders were my only concern. My last review of The Hungry Dog showed that I paid 7500KRW for two sliders and honestly, the quality and quantity were equal if not better. So why are two sliders at LCA 10000KRW and three are 14000KRW. Personally, if you were on a budget, I would head down to the way to The Hungry Dog in HBC a grab their sliders for 7500KRW. The total bill came to 49000KRW. A good value considering the quality of the food. I definitely am looking forward to many more trips with the wife and kid in the future, and I’m hoping LCA has a long, and bright future in Itaewon.

Who should visit LCA: A really chill and laid-back restaurant that serves great burgers at a fair price (minus the sliders). In Itaewon, I would say this is probably one of the better places to find a burger.

Who should avoid LCA: The value on the sliders threw me off. If you are a little tight on cash, there are other cheaper options available. This place is high quality, so you are going to spend a little more.