Burn Baby Burn – Burn In Gyeongridan is a Relaxing, Classy Joint with a 1940’s Gangster Feel

There is nothing like a nice cigar and a good drink to wind down the evening, or to catch up with an old friend. In this case, my old man fresh off the plane and eager to have a drink and a smoke, I decided that burn would be the perfect place to reminisce about the musings over the past year. 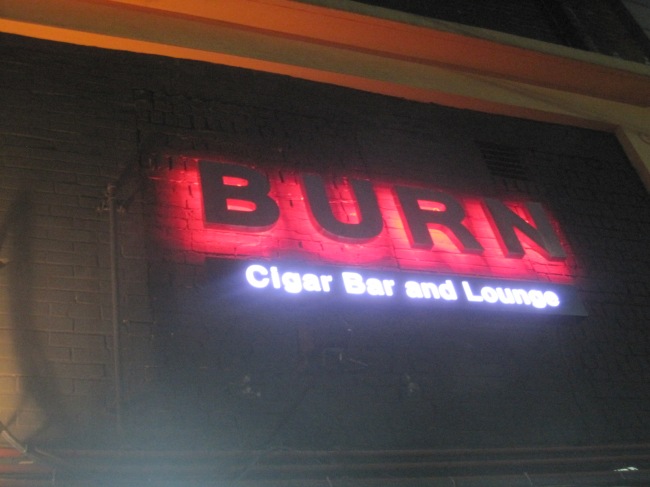 LP’s Description: Lonely Planet makes references to the multiple types of cigars that are available including Cuban cigars and single malt whiskeys. They also make reference to the shabby “Edwardian English club atmosphere”.

How to get there: The easiest way to get there is to take the subway to Noksapyeong Station (Line 6) and depart from Exit 2. You will need to go down the hill with the army base on your left. Once you get down the hill you will need to cross the street. Head below ground and walk under the main street. You have two choices to ascend back up to civilization. The staircase on the left is the best choice. Once you are above ground, you will need to make a right, there will be a military like establishment with armed guards beside (ironically) a church. There are a bunch of little tiny bars, and a dude with a chicken truck. Burn is on the second floor across from the church.

Membership Option: Burn is essentially a members only club, but non-members are welcomed as long as there is room. Since there were only a couple of people in the room we lucked. Cost KRW1, 000,000 (KRW1, 200,000 if paid by credit card)

Benefits Upon purchase of a Burn Membership, members will receive
Any two bottles from The Diageo range of Classic Malts Selection Whisky; for those who prefer a bottle of Zacapa 23 year old aged rum may be substituted for whisky.
Or
One bottle of Zacapa XO

Throughout the year Members will receive many valuable benefits. These include:
15% discount on all bottles of whisky, bourbon, and spirits listed on our menu
15% discount on all Cuban cigars listed on our menu
A private keeping locker for your bottles purchased at Burn
A private humidor for your cigars
Invitation to Members’ Only events
25% discount on all general Burn events
Monthly newsletters and special offers on limited edition whiskies
Waiving of our setting fee
Waiving of our music cover charge
Table reservation rights at Burn any night of the week

Service and Atmosphere: I don’t like to use the term posh, but I would definitely use the term classy to describe Burn. Although they don’t make you feel unwelcome, if you walked in looking like a hobo, you would definitely feel out of place. They have a dress code which includes no hats (I was guilty of this infraction), no flip flops and no shorts. The atmosphere is very relaxed and laid back, but in a classy way. This is one of the perfect places in Seoul to have a quiet conversation and enjoy the smells of sweet tobacco. The leather seats and quaint bar adds to the ambience of the lounge. I will agree with Lonely Planet, in that it does have that Edwardian English club atmosphere, but I would throw in a dash of 1940’s rat pack atmosphere as well. The sounds from the stereo emits the smooth sounds of jazz. Chill baby, chill. 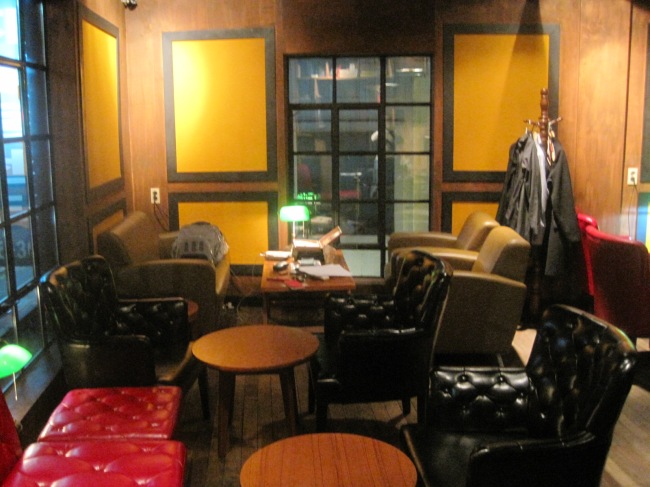 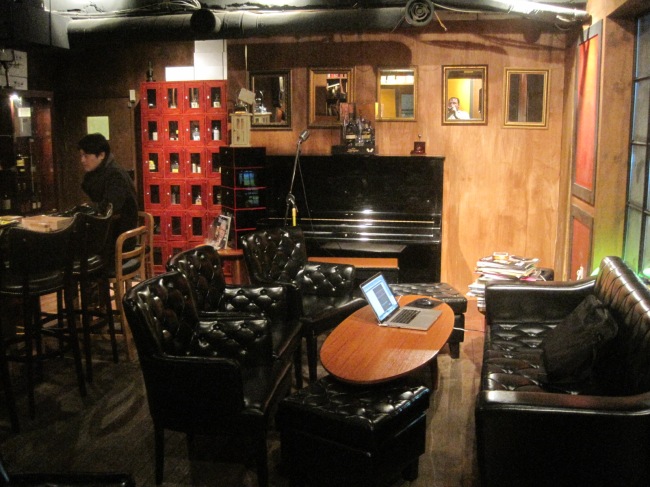 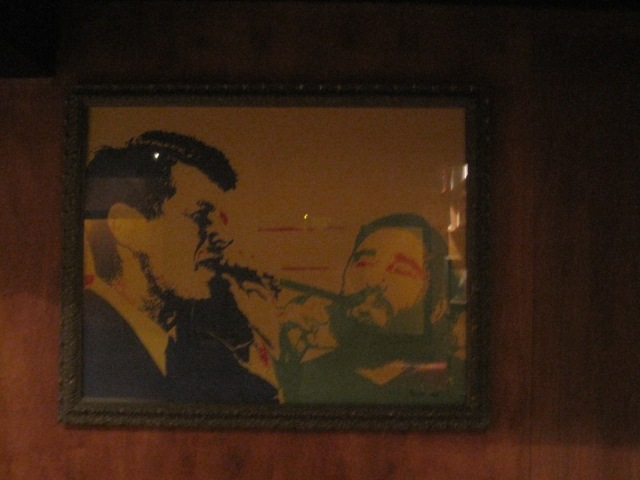 I’m not a cigar or scotch aficionado, so it was a nice to get a quick lesson from our server. He explained the difference in cigars and scotch flavors and recommended combinations. He also lit our cigars for us and was on hand when we needed a relight. Overall, the service was very knowledgable and attentive. No complaints from either me or the old man.

Cigars and Scotch: Today, we had a 15-year-old Glenlivet and two Montecristo #2 cigars, the same type that Castro smokes. I’ve always loved the single malt Glenlivet. Normally, finances will only allow me to have the 12, but today was a special occasion so we splurged for the 15 year old. The scotch was smooth and had a distinctive oaky flavor. There was also a hint of fruit, maybe cherry. It was a very enjoyable drink, with a nice dry aftertaste. The large ice ball was a 1000WON investment and was worth the purchase. It’s slow melt kept the drink cool without watering it down. 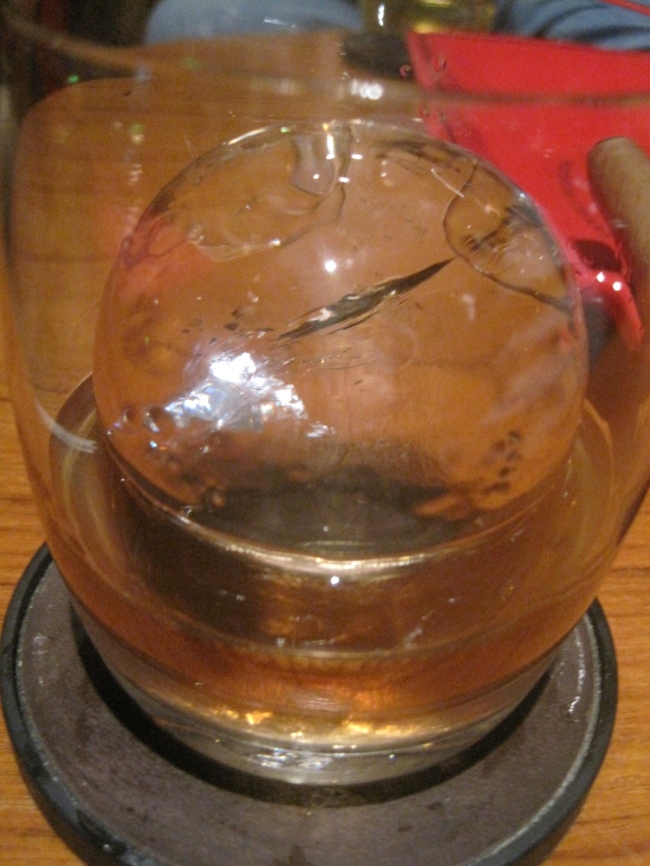 The Montecristo #2 was a nice, slow burn. It began with almost a spicy flavor, and slowly moved into a more woody and cedar flavor. It produced a lot of smoke, which makes you look like an evil villain plotting world domination. The cigar itself was constructed nicely. The cigar didn’t go out easily and the ash didn’t fall off. A very nicely packed cigar. 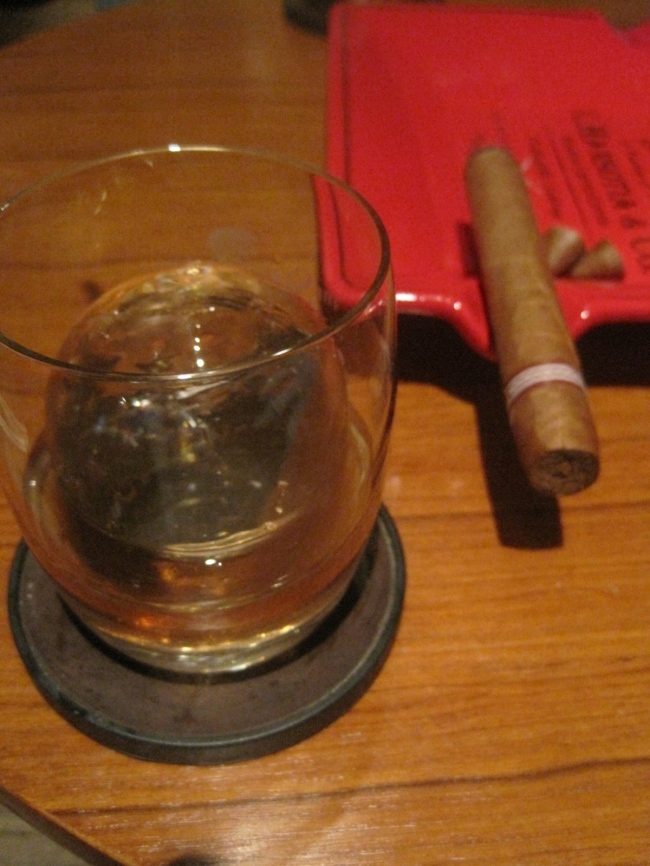 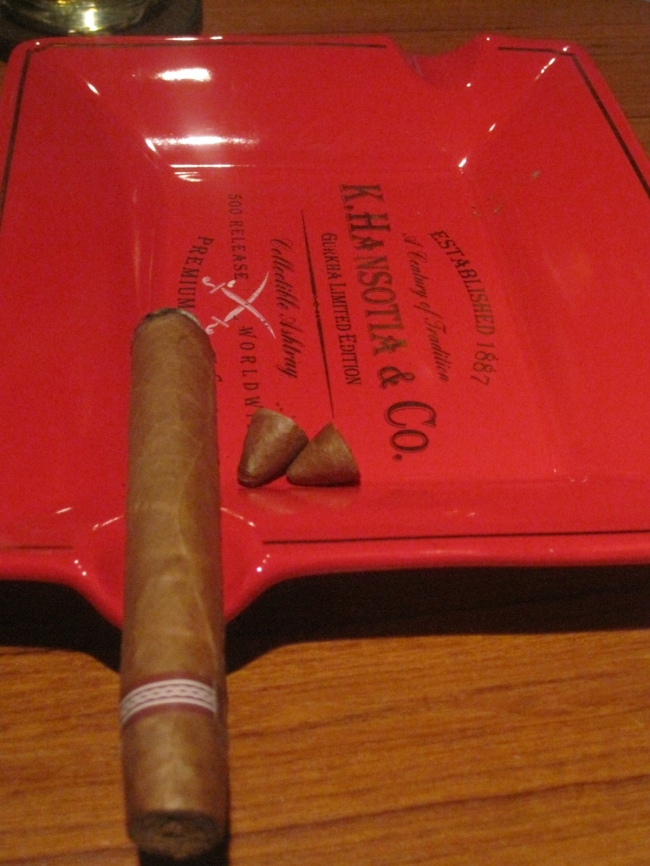 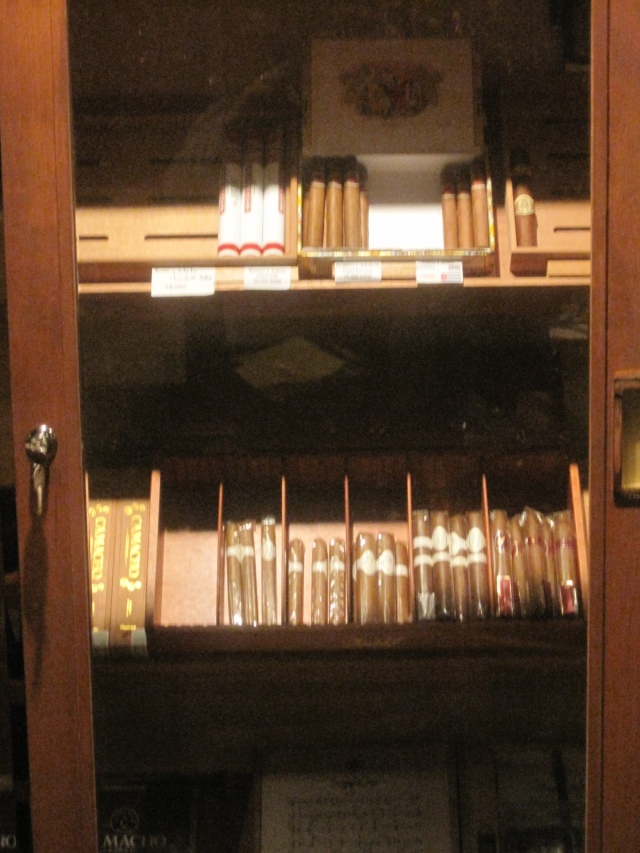 Who Should Visit Burn: Cigar and scotch aficionados who talk about the finer points in life while swirling their drinks in an ominous way.

Who Should Avoid Burn: Not exactly for the budget traveller. My suggestion is to head up to Itaewon, go into the convenience store that is just below Seoul Pub, buy a few cigars and head to the smoke room to chat with the colorful characters of Seoul Pub.