The idea of kimchi, tacos and french fries tends to either inspire intrigue or disgust when pitched to culinary aficionados. However, since the explosion of Korean and Mexican fusion in the Southern California food truck scene, the craze naturally made its way over the Pacific and into the heart of Korea. Vatos is a Seoul culinary hotspot and is definitely a place you need to try before you leave the ROK. But a word of advice gentle reader, get there early or make a reservation. 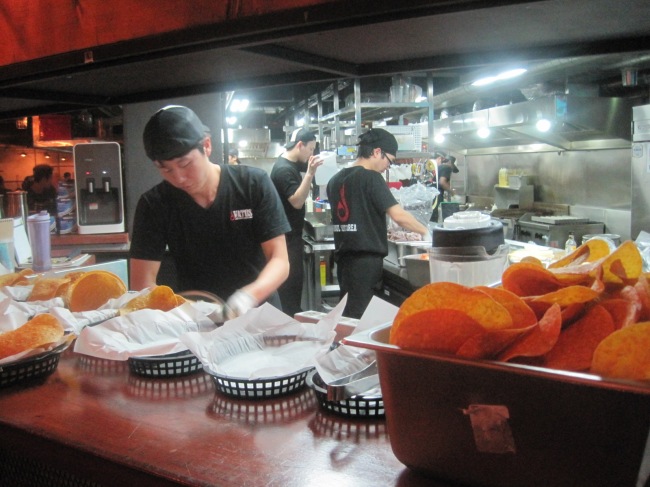 LP’s Description: Lonely Planet describes Vatos as “gourmet tacos” because they infuse galbi short ribs and pork belly into their tacos. They also mention that it is a hotspot for American GIs, and of course, they mention the kimchi fries and the makgeolitas.

How to get there: The easiest way to get there is to take the subway to Itaewon station (Line 6) and depart from Exit 1. Lonely Planet says to use Exit 4. However, that was for their old location. Walk for about 500 meters and you will pass What the Book and Wang Thai on your right. Now, it can get a little tricky. You will notice a small hill gradually on your right behind the Wang Thai building. Go up the that hill and Vatos is on the left.

Atmosphere and Service: The atmosphere at Vatos is distinctly urban with a hip hop vibe. 1980’s hip hop beats from the radio and dark atmosphere give it a trendy feel. The open kitchen is awesome. The smells and sounds from the kitchen pays tributes to the food truck origins of the restaurant. The service is always great. They are pretty attentive and the food is always served in a quick and prompt manner. My only beef was this service was that we asked for a couple of our items first as appetizers but received all our food at once.

Food and Drink: It was our Valentine’s Day dinner and it was a feast! We ordered Kimchi Fries, Honey Tequila Chicken Wings, The Sid Burger and the Galbi Burrito Classico. We both ordered Dae Han Mango beer and margarita and a Mango Makgeolita. Needless to say, we were feeling great when we left.

Kimchi Fries (11,500KRW): A legendary appetizer, and the epitome of Korean-Mexican fusion. I remember my first time ordering the kimchi fries, feeling as though I just wasted 12,000KRW but at least I could go home and tell people I had kimchi fries. How I was so naive. The Kimchi fries are amazing. A bed of french fries, with kimchi, pork, various peppers and onions, make this a spicy and exciting dish. It truly is the ultimate appetizer and should be ordered with every visit.

Honey Tequila Chicken Wings (12,000KRW): The chicken wings were nice and juicy. The jalapeños were prevalent but they weren’t overly spicy. The wings had lots of interesting flavors, including a hint of citrus that balanced with the honey flavor of the wing. The tequila wasn’t overly present, but you could taste a hint of it in the wing. The blue cheese was a great dipping sauce and complimented the flavor of the wings.

The Galbi Burrito Classico (10,000KRW): A sizable burrito that is sliced in half for easy handling. The galbi was nice and tender, and prevalent throughout the burrito. It was packed with rice, cheese, sour cream, lettuce and chipotle mayo. The hot sauce was nice and flavorful,  but not overwhelming. One of these could easily fill a hungry belly, and on top of the apps and drinks, we were ready for a nap. 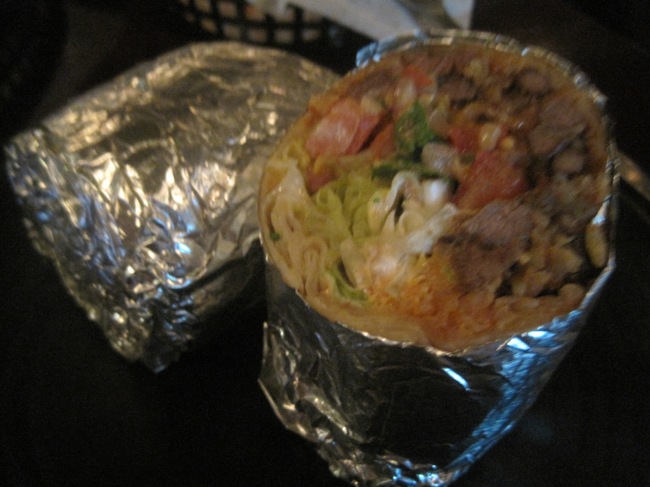 The Sid Burger (15,000KRW): The legendary Sid burger, named after co-owner Sid Kim, has found its way into the hearts (literally) of Seoul burger and Mexican food enthusiasts. A beef patty topped with BBQ pulled pork and apple cole slaw, sweet pickled onions and jalapeños. The burger is a fucking monster! I literally don’t know how else to describe it. The pulled pork and the beef surprisingly go well together. I loved the sweet tanginess  of the BBQ sauce on top of the beef patty. The salt and sweet really balance each other out. If you are burger fan, you need to try this out. But be forewarned, you better have an empty stomach.

Dae Han Mango (17500KRW): The sweetness of a margarita and the tartness of a beer gives this drink a unique taste. At first, I was skeptical, but after having trying one at KrissKo, I decided to give it a try. A nice beverage, that is refreshing and deceivingly full of alcohol. The sweetness and the tartness play off each other. It comes at a steep price, but I would order it again. However, I would wait until the summer where I would appreciate its refreshing taste a little more.

Mango Makgeolita (13000KRW): The mango is the dominant flavor and makes for a sweet, crispy drink. A potent concoction of makgeolli and tequila, this beverage is light, but packs a punch. A great drink for the hot summer months, but not so much in the winter. That said, would definitely order it again, as it cooled down the mouth down from the fiery culinary delights at the table.

Value: After all of these culinary treats and potent elixirs, our bill came to approximately 100,000KRW. There is a lot of quality in this menu, and for that reason, i would say it is a great value. However, I find the prices of the drinks a little overpriced. If you wanted to save a little cash, a couple of beers or sodas would suffice. Mexican and Korean together at last? Really? Who would have thought, but the culinary gods work in mysterious ways.

Who Should Visit Vatos: Diners looking for a unique culinary experience. Fans of both Korean and Mexican food, especially if you from the SoCal area will love this place.

Who Should Avoid Vatos: If you are looking to get drunk here, you better bring the gold card amigo.