My last review of Left Coast Artisan Burgers, which from hereby will be referred to LCA, was a great experience. However, they had only been open a month. I find that restaurants that have only been open for a month tend to put forth their best efforts to give a good first impression to their customers. So, on the weekend, my wife and I decided to head back to LCA to see if they were keeping up the great work. So if you don’t have time to read this article, I’ll summarize it for you right here: Yep. They are still kicking ass.

How to get there: The easiest way to get there is to take the subway to Itaewon Station (Line 6) and depart from Exit 4. Now, you need to spin around and find the Taco Bell. You should be on the opposite side of the street as the Taco Bell. Now start walking away from the main strip. In about 150 meters, Left Coast Artisan will be on your right, second story up. 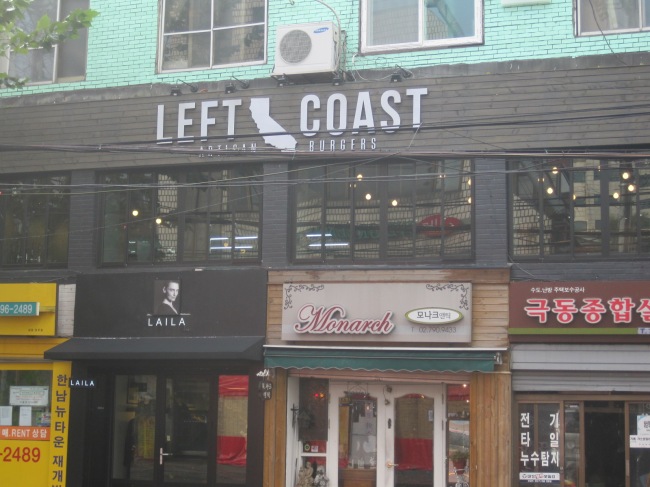 Atmosphere and Service: The atmosphere hasn’t changed at all. It still has that chilled out California vibe that has made it so popular with the locals. The service is prompt and attentive. They always come over and assure that you are having the best experience possible. Marley still blares away on the stereo. The only thing this place is missing is a beach and special brownies. 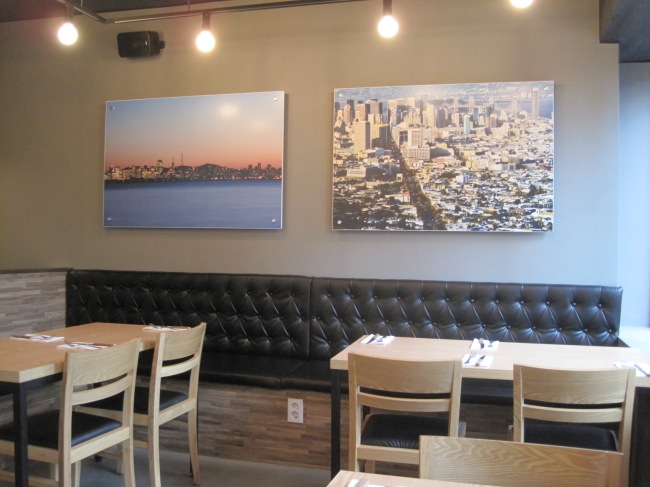 Yes I am aware that I am simply reposting the images from my previous visit… and yes I’m that lazy.

Food and Drink: It was our first lunch without the little guy, so mom and dad decide to live it up. Today we ordered Deep Fried Mac and Cheese Balls, Fried Pickles, The John Wayne Burger, The Season Winter Solstice Burger, Sangria and a Great White beer. I wanted to order the Napoleon Tatter Tots, but they food processor was down, so they compensated by giving us a free order of fries. Serviceuhh!!

Deep Fried Mac and Cheese Balls (6000KRW): Mac and Cheese deep fried? Sounds good, but would it taste good? Short answer: yes. I was hesitant to order this, but since we are both lovers of mac and cheese, we decided to give it a shot. It was an excellent starter. The cheese was melted thoroughly in the middle of the battered balls, and they were deep fried to perfection. We ate them with a marinara sauce, which surprisingly complimented the mac and cheese fantastically. My only slight qualm was that they do break apart fairly easily and this could get a little messy. 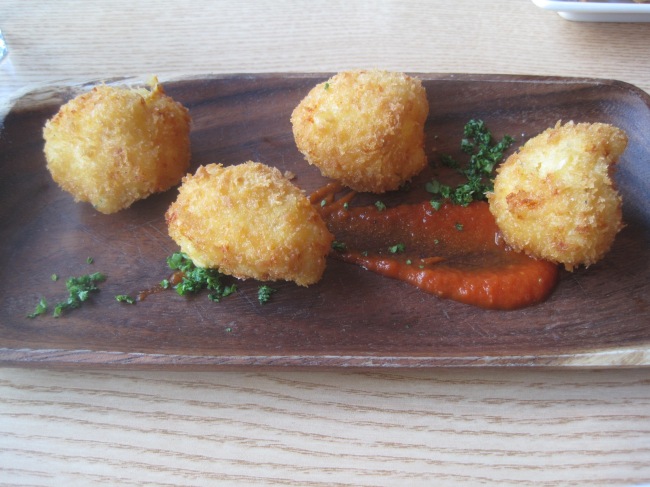 Fried Pickles (5000KRW): A southern staple, in the heart of Seoul, cooked by dudes from the west coast. A strange combination, but they pulled it off. I didn’t think I would ever have the opportunity to have fried pickles in Asia, but to my surprise they were actually pretty delicious. I found that the batter countered the dill taste of the pickle. Although I would have thought there would be a bit more seasoning on the batter and could have been a little more crunchy, overall it was a satisfying dish. Also, for 5000KRW it was good value. They served up a nice plate for five bucks. 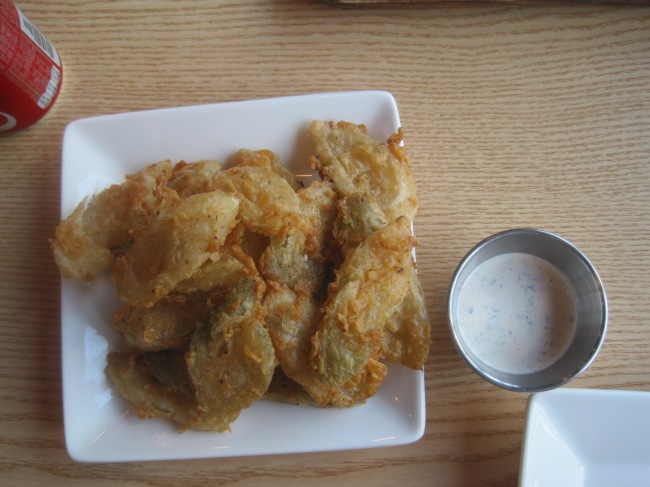 The John Wayne Burger (15000KRW): Howdy pilgrim! Come eat my delicious beef goodness.. Hum.. Okay, anyway, mind out of the gutter, let’s talk some food. The John Wayne burger consists of onion rings, BBQ sauce, a beef patty, cheddar cheese and bacon. Sounds delicious? Yes it is. The patty was cooked perfectly. it was well done, but not dry. The bacon was cooked but not burnt. My only criticism would be that I didn’t think they used enough BBQ sauce. Some people give a shit if they get messy when they eat. I personally, I have no inhibitions when it comes to messy eating. If my hands smell and tastes like BBQ sauce for the day, I consider that a blessing. 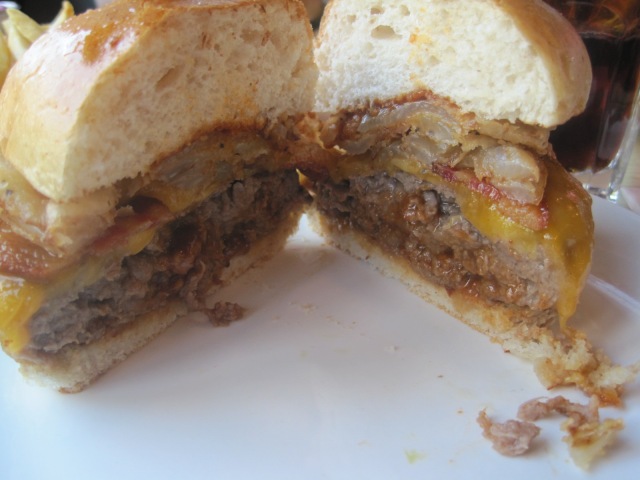 Winter Solstice Burger (16000KRW): Although it was only a seasonal menu addition, I’m keeping my fingers crossed that they put this beast on the menu permanently. The solstice burger consisted of swiss cheese, onions and kale chips. The kale gives the burger a nice, earthy flavor which is perfect for the cold winter months. The crispiness of the Kale and the melting of the cheese was delightful sensation on the tongue. A great recipe that was perfect for the season.

Sangria (10000KRW): Although there is still a chill in the air, it is beginning to thaw and that means its time for fruity drinks. We noticed a bit of a paradox, ordering a cool, summer drink with a winter burger, but in the end it worked out well. The sangria was sweet, but still kept the integrity of the wine. The pears, apples and lemon blended together to create a refreshing and flavorful treat. The fruits worked well with the wine, and it was definitely worth the 10,000KRW.

Value: The whole bill came to about 75,000KRW. In my opinion, LCA is always going to be worth the trip down to Itaewon because of the atmosphere and the quality and care they put into their food. I’m truly a fan of this place and would gladly pay this price. However, for the budget traveller, this could be a difficult decision. It’s easy to sit back as a man with a dual income family, who can afford to splurge on the little luxuries of life. With that in mind, I remember what it was like to be a budget traveller and this could be out of some peoples’ price range. There are alternatives, including Two Broz, just up from Exit 3, and of course, McD’s on the main strip, if you really need something to tied you over quickly.

Who Should Visit LCA: Anyone looking for a great burger and a drink in a relaxing atmosphere this is one of the best spots in Seoul. This place is also family friendly, that is of course, if you don’t mind your kid listens to Bob Marley 🙂

Who Should Avoid LCA: A little tight on the budget, and it would be difficult to recommend to a backpacker who has a strict budget to adhere to.