I’m not sure, but I think 양꼬치 (Yangkkochi) is a play on words for 양고기 (Yang gogi) which means lamb in Korean. Either way, Jill and I were tired after a long week of taking care of a sick little man and decided to get out of the house for a bit to relax with some lazy man’s BBQ and a couple of Tsingtaos. It was the best idea we had all week. 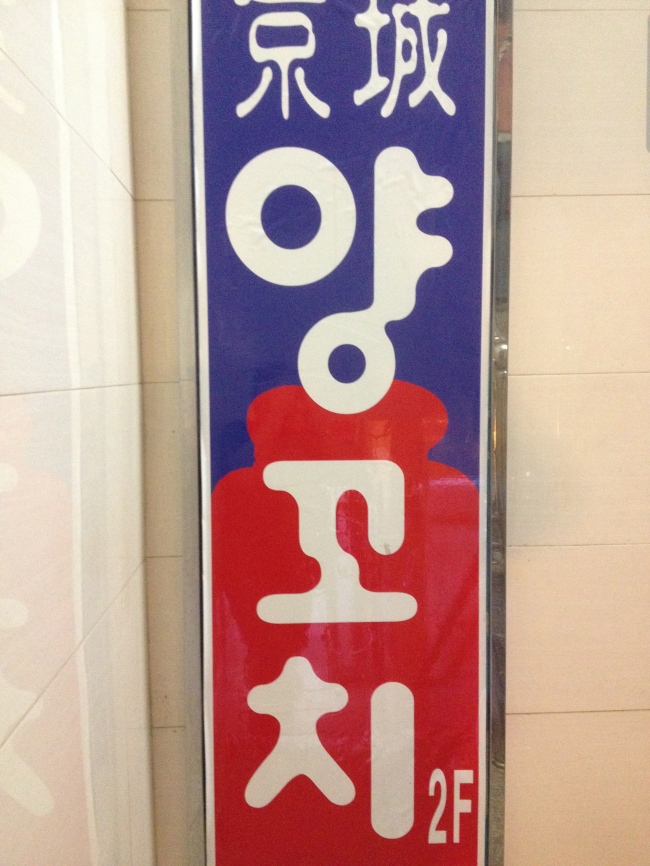 How to get there: It’s easy enough since it is right behind Metropolis! But for those of you who are not familiar with the area, the easiest way to get there is to take the subway to Nowon Station (Line 4 and 7) and depart from Exit 1. Once you’ve left the exit, make a right and walk down the street. 양꼬치 is on your second left on the second floor. 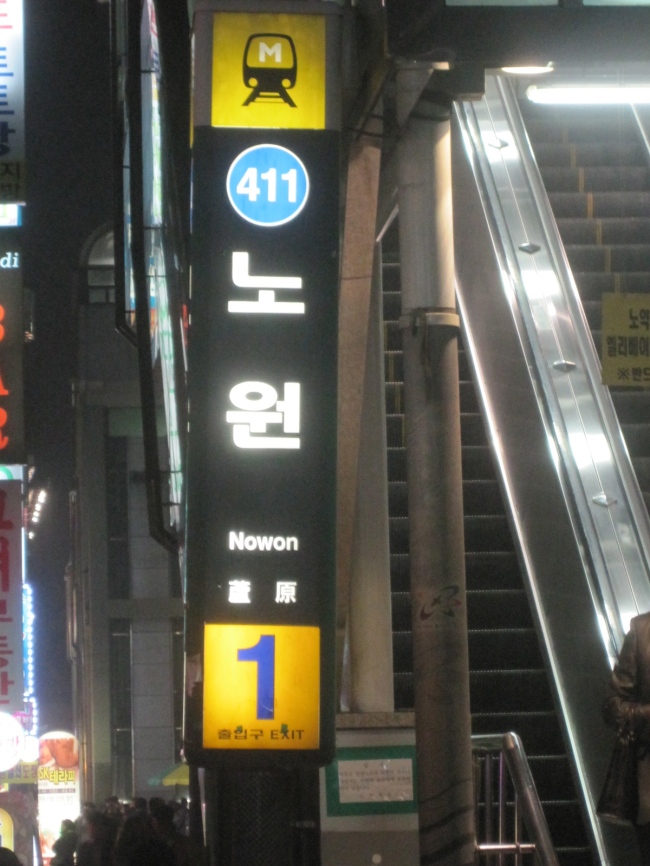 Atmosphere and Service: The first thing that stood out at 양꼬치 was the amount of open space. Jill and I both had plenty of room and weren’t elbow-to-elbow with the table next to us. We were lucky enough to get a table by the window which made for excellent people watching on a warm Saturday night. There was a birthday party going on with a bunch of young men who were getting a little rowdy, but nothing out of the ordinary for a Saturday night.

The service was great! We were a little confused on how to cook the skewers of the lamb, but the server came over to show us. We ordered a lot of food and it was all delivered in a timely manner. My only complaint was that we ordered some more lamb and I think something was lost in translation. Maybe I said the two lambs were good, but she never returned with two more plates. No big deal, we got something else instead.

Food and Drink: A feast awaited. We were starving. Tonight we ordered two plates of lamb (양고기), a couple plates of ribs (마라갈비), dumplings (물만두), cold buckwheat noodles (물냉면) and three large Tsingtaos to take away the pain of the week.

Lamb Skewers 양고기 (12,000KRW): We ordered the lamb skewers to start. I was a little skeptical about the quality of lamb since Korean BBQ places occasionally serve subpar cuts of meat. However, I was pleasantly surprised. The lamb had that nice gamey taste and the fat dripped away into the wooden coals under the grill. There was a small bowl of spices to coat our lamb and it complimented the meat nicely. The spices just had enough kick. There was a little red pepper, some black pepper and maybe a hint of paprika. It was a nice combinations of flavors and really added some life to the lamb. I could have sat and ate plate after plate all night. 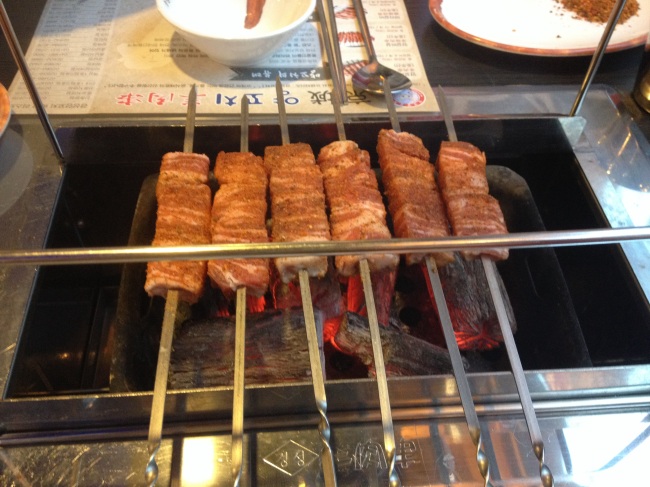 Ribs 마라갈비 (13,000KRW): We ordered the ribs. Unlike the lamb skewers, the ribs were a little more difficult to eat. After you’re done grilling the ribs, you need to take the piece of meat off the skewer and eat around the bone. I actually swallowed a small bone and I could feel the jagged edges go down my throat. Not a nice experience. The ribs were marinated lightly and had a nice sweet flavor. When the ribs were mixed with the bowl of spices, the sweet and spicy flavors zestfully bounced off the tastebuds.

Dumplings 물만두 (6,000KRW): The dumplings were okay. They didn’t have much filling and weren’t that flavorful. That said, for 6000KRW, we received a nice plateful. 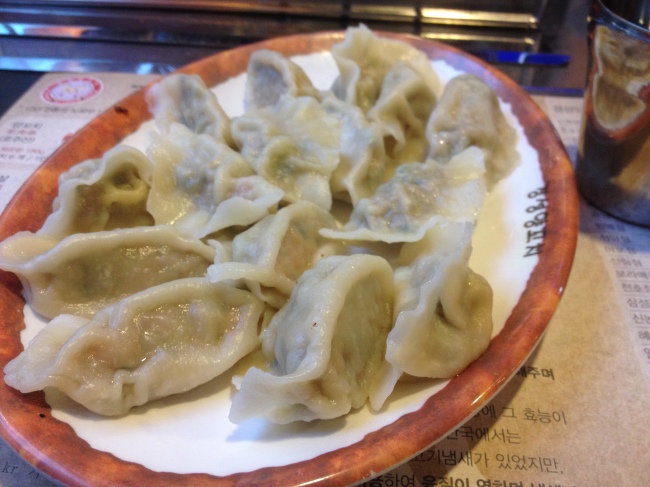 Cold Buckwheat Noodles 물냉면 (5,000KRW): One of the best parts about summer is the excellent cold noodles known in the Land of the Rising Sun as 물냉면 (mul naengmyeon). A refreshing side dish that can be eaten as a meal is always an excellent choice. This was no exception. The noodles had a cold, vinegary broth, some kimchi (that’s new), cucumbers, an egg, a nice spoonful of gochujang (고추장) and sprinkled with sesame. A really nice side dish which was very filling.

Side (FREE!!): One of the best parts of the Korean dining experience are the free side dishes. Today we had some kimchi, a bowl of flavored carrots and onions, a small salad with thousand island dressing, a bowl of bean sprout soup and of course the huge bowl of garlic.

Drinks: Three Large Bottle of Tsingtao (5,000KRW): Chinese beer on a warm night. Nice. I like Tsingtao because it has a light, crisp flavor that goes down smooth; possibly too smooth for my own good. The beer calmed our nerves. Thank you alcohol for relieving us of our stress! We love you!

Value: The whole bill came to around 79,000KRW. This could have easily filled a table of four. We were stuffed and had to be rolled into a taxi. The lamb was tender and juicy. The sides were plentiful and the noodles were refreshing. My only regrets were ordering the dumplings. I thought they were a bit of a ripoff for 6,000KRW. Other than that, there was plenty of value, and we would definitely return.

Who should visit 양꼬치 (Yangkkochi): People who are sick of regular BBQ and want to try something a little different. People who enjoy lamb in a fairly relaxed atmosphere.

Who should avoid 양꼬치 (Yangkkochi): Saw a family with a toddler there. Parenting fail. 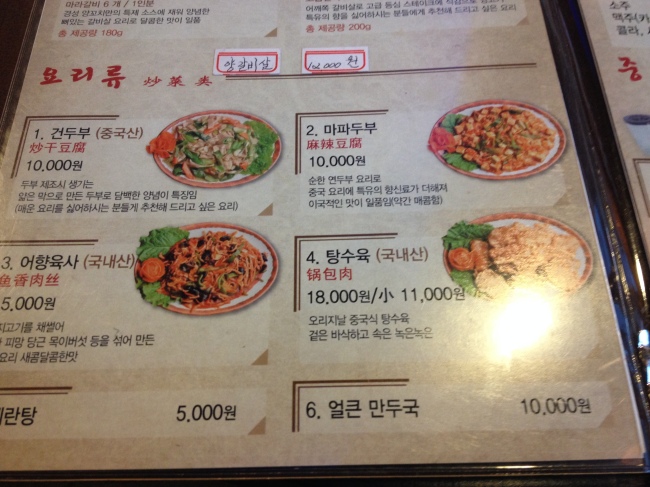 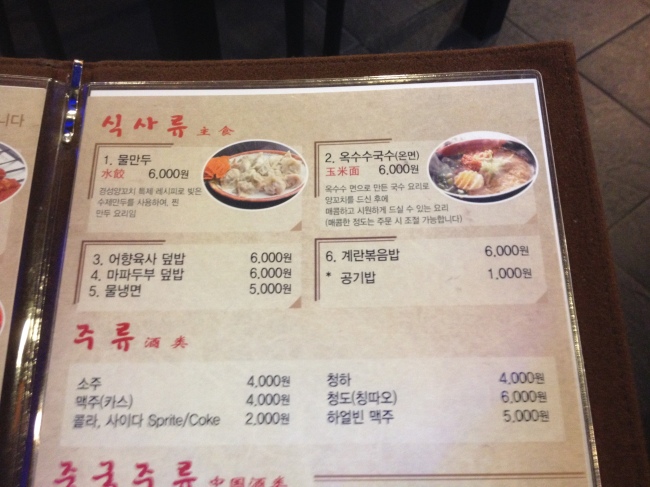 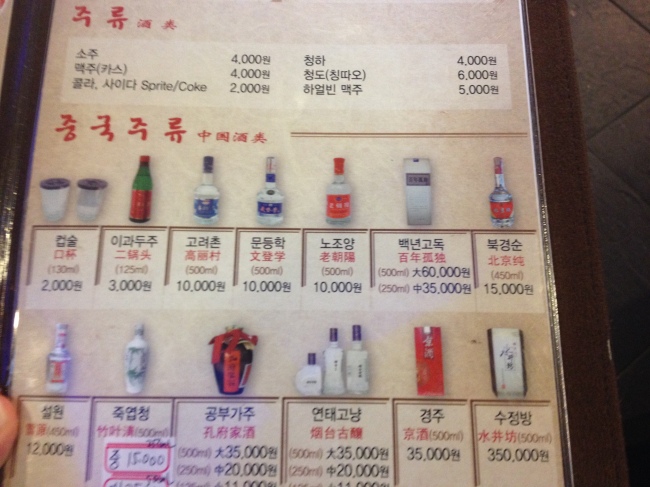