One of my followers, Tigerpendant, whom has great tastes in books and a very thoughtful outlook on life, asked if I did requests.  I’ve never actually done one, but decided to give it a try. I decided to review Hill Side Bistro, up on the hill that leads down to the depths of Gyeongnidan. Anyway, it wasn’t too special. In fact, it prompted me to invent a new acronym: JAR (Just a Restaurant). In the magical culinary wonderland of Itaewon, it’s not good to be a jar. As the area continues to develop, as a restaurant you need to stick out. When I walked into Hill Side, I felt as though I’ve walked into a thousand restaurants just like this one. Nothing stood out; not the food, not the atmosphere nor the service.

How to get there: One of the easier places to find, so it has that going for it. Take the subway to Itaewon Station (Line 6) and depart from Exit 1. It’s going to be a moderate walk to the brink of Noksapyeong Station. You will pass What the Book and Vatos on your right. Now, when the road forks into two, head up the hill. You will pass a cowboy boot store and on the right is Hill Side Pub and Bistro all painted up in baby blue, like some seaside Maine lobster bar. 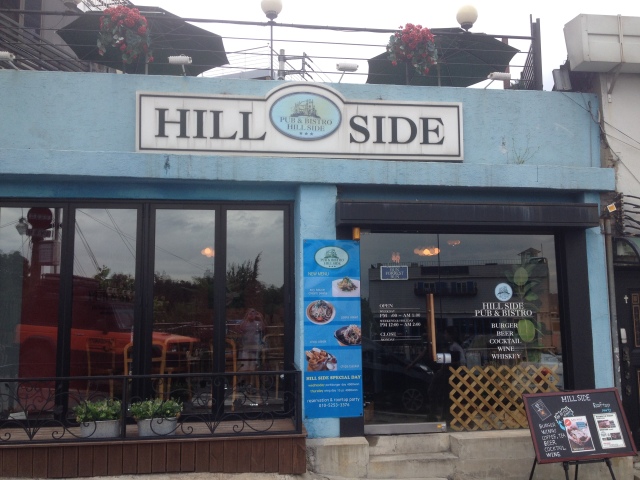 Service and Atmosphere: I arrived just past lunch and at first I thought the place was closed. The dim lights emitted a slight glow of life, so I took a chance and walked in. Success! The door is opened. However, no people. I walked around for a bit, looking at some of the decor on the wall and took a few pictures. Finally, I yelled “Hello!”. A gentleman came down and asked what I wanted. I asked if they were open and he nodded and directed me to a table. The atmosphere was conflicting. On one hand, it had the makings of a traditional European-style bistro with the simple wooden chairs and tables, as well as bottles of wine aligned on the wall. On the other hand, there was an Iron Man mask on display and late 90s American pop music blaring from the radio. Ah yes, nothing exemplifies the quiet, European essence of a bistro like the Backstreet Boys.

Service was pretty sub par. The gentleman who greeted me at the door was nice enough. He took my order and got to work. However, the food took forever to get out to me. I was the only person in the restaurant and I waited for about 30 minutes. I would be concerned if this place was packed. As he went into the kitchen to get started on my order, a young waitress appeared and took my drink order. A glass of Coke was served a couple of minutes later. I finished it pretty quickly, but there was no refill, no smile, nothing to even remotely ensure the customer that she gave a shit about them. Sigh.

Nothing exemplifies a bistro like an Iron Man mask or those little weird collectable plates your grandma used to have.

Food and Drink: Today I ordered a Bacon Cheeseburger and a Chicken Caesar Salad. To drink I ordered a Coke. The bill came out to approximately 30,000KRW.

Chicken Caesar Salad (13,000KRW): As per Korean standards, all the food arrived at once. First impression was positive because there was a nice sizable chicken breast on the salad. Although it was fairly well seasoned, it was dry as a bone. There was absolutely no juices and it killed the rest of the salad. The salad itself was soggy. The dressing was limited and the croutons, which are absolutely key to the salad, were wet and mushy. This is not exactly something I would order again, and in fact, I didn’t finish it.

Bacon Cheeseburger (13,000KRW): Remember when that old lady back in the 1980s asked, “Where’s the beef?”. This was my first thought as my burger was served. The bun and toppings were overwhelming. At first glance, it appeared as though I ordered a veggie burger and not one that was supposed to have two types of glorious flesh on it. I opened up the bun, removed the dreaded tomato and found a fairly lifeless looking patty with a couple of strips of bacon. On the bright side, the bun was extremely fresh as well as the veggies. The burger itself wasn’t that bad, but nothing about it stood out. A handful of fries didn’t help the value either. 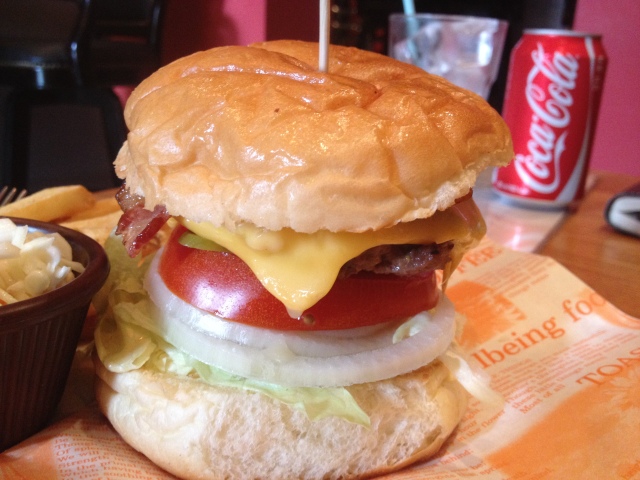 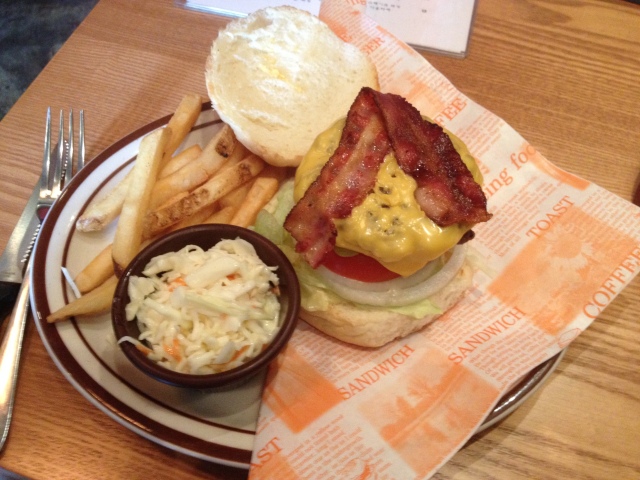 Value: There really isn’t much value here. The food was substandard and the service was poor. With so many options in the Itaewon/Noksapyeong area, why anyone would venture up a hill for this place? A golden rule when opening a restaurant in Itaewon: You need to stand out from your competition. There are so many generic restaurants in that area, that the truly successful ones are the ones that either have a loyal customer base because of service or food. Hill Side has neither.

Who Should Visit Hill Side Bistro and Pub: They have a rooftop party. That might be cool?

Who Should Avoid Hill Side Bistro and Pub: Not much happening  in the service or food departments at this place. If you want a good burger, I recommend heading to Left Coast Artisan or Two Broz. 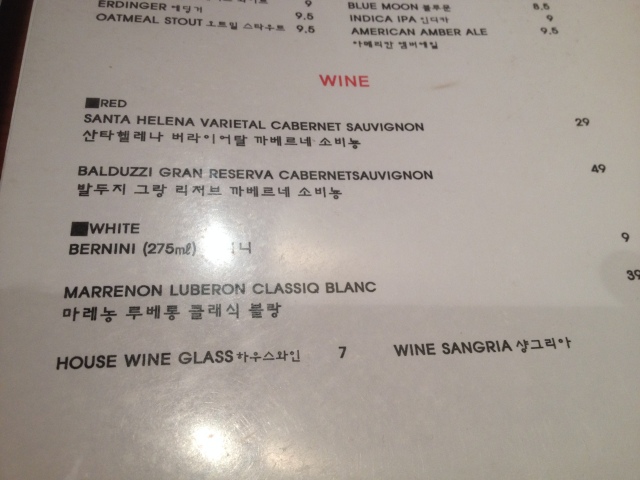 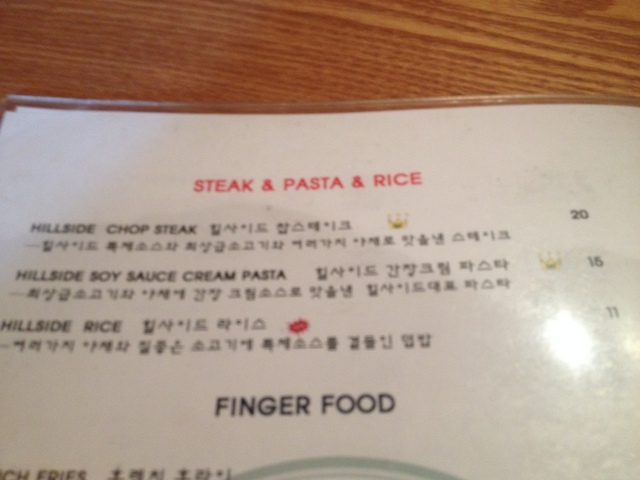