There seems to be a “monster” theme emerging in Seoul. We have Toast Monster in HBC, Monster Pizza in Hongdae and now Monster Cupcakes in Gyeongridan. I’m really hoping for some Monster Ribs to pop up shortly. The southern BBQ craze is in full swing in the city, and it’s only a matter of time before four or five places pop up to cash in. I’ve actually heard a little rumor of one opening up in a couple of months in Itaewon. Keep a lookout. Anyway, on to the sweet, succulent cups of cake known as Monster Cupcake in Gyeongridan. Will it stand up to the king of cupcakes in Itaewon Sugar Daddy? 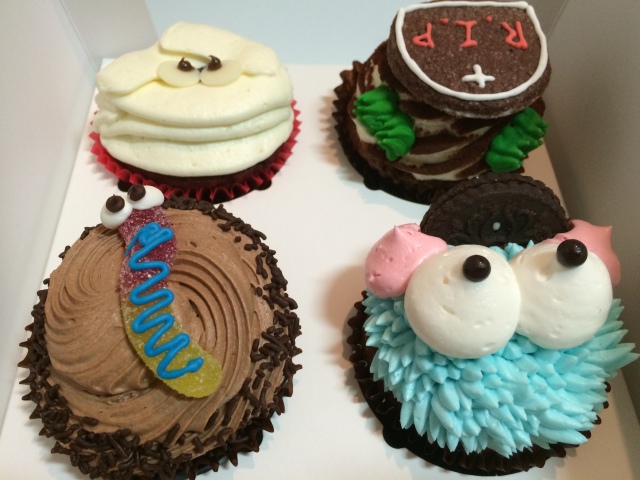 How to get there: The easiest way to get to Monster Cupcakes is to take the subway to Noksapyeong Station (Line 6) and depart from Exit 2. Walk down the hill past the military base and down back the steps into the tunnel that will take you underground across the street. Ignore the graffiti and take the exit called, “Financial Management Corps”. Pop out of the tunnel with your life still in check and walk across the street to Noxa and make an immediate right in front of the restaurant. You will head up the hill about 200 meters passing various restaurants and breweries with Monster Cupcake tucked between them. 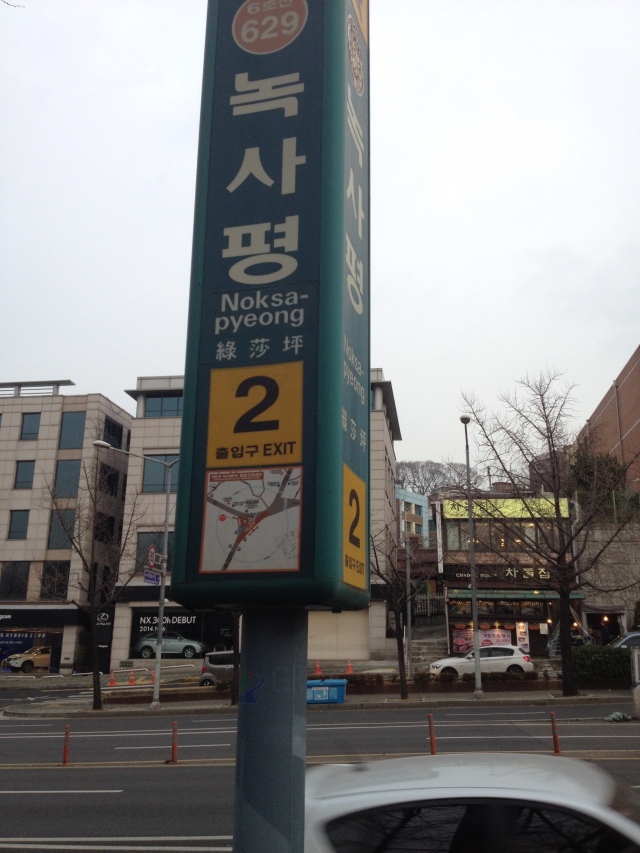 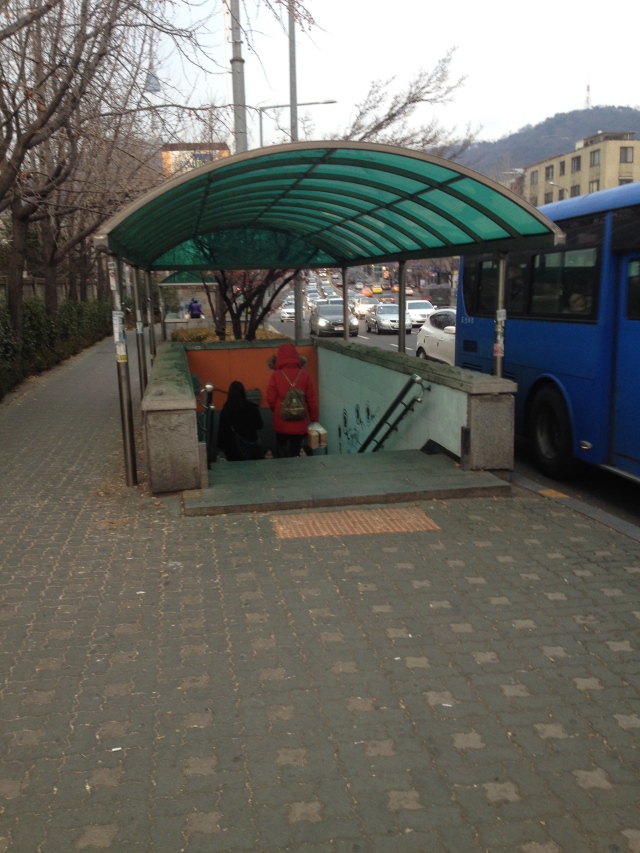 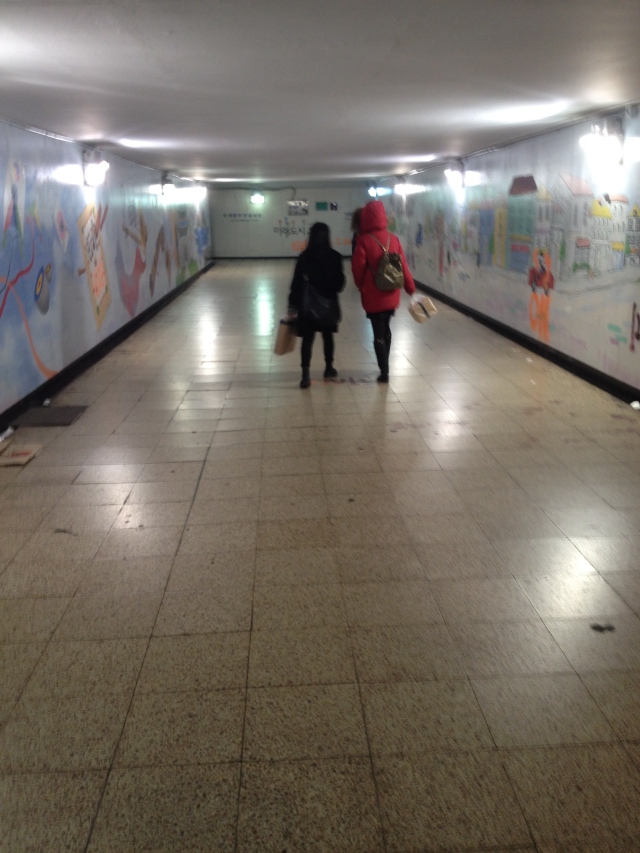 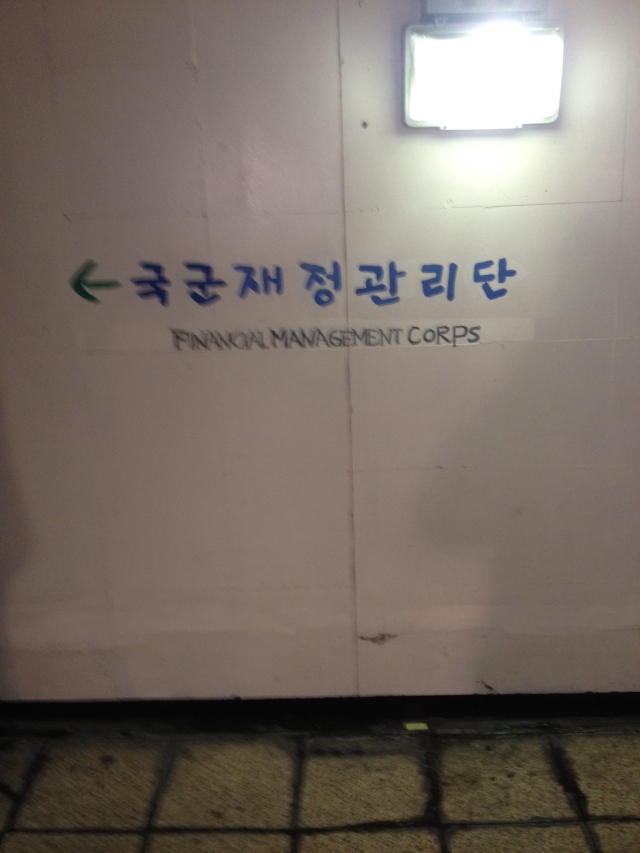 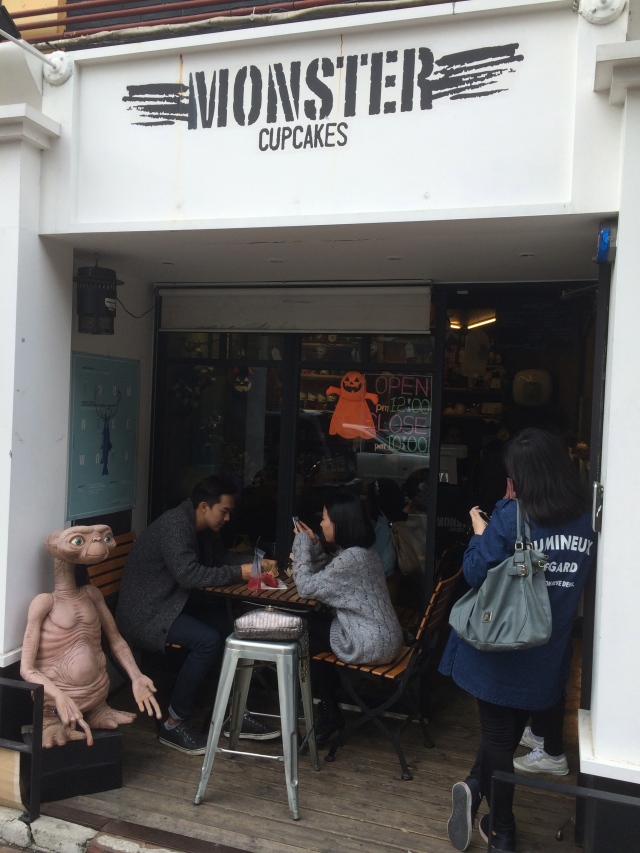 Service and Atmospheres: Creepy in a fun way, not a fat, balding white guy peering out of an unmarked van kind of a way. Fluffy spiders, various memorabilia and other creepy, crawls hang on the ceiling and the walls. Of course, E.T. is watching the joint from outside waiting to go home (haha…uhhh) At the center of it all, behind clear glass windows, are the delightful cups of cake, spread like a psychedelic sugar rainbow. There are only four chairs and two tables in the entire place, so seating is scarce. Be prepared to bring the cakes home for consumption. 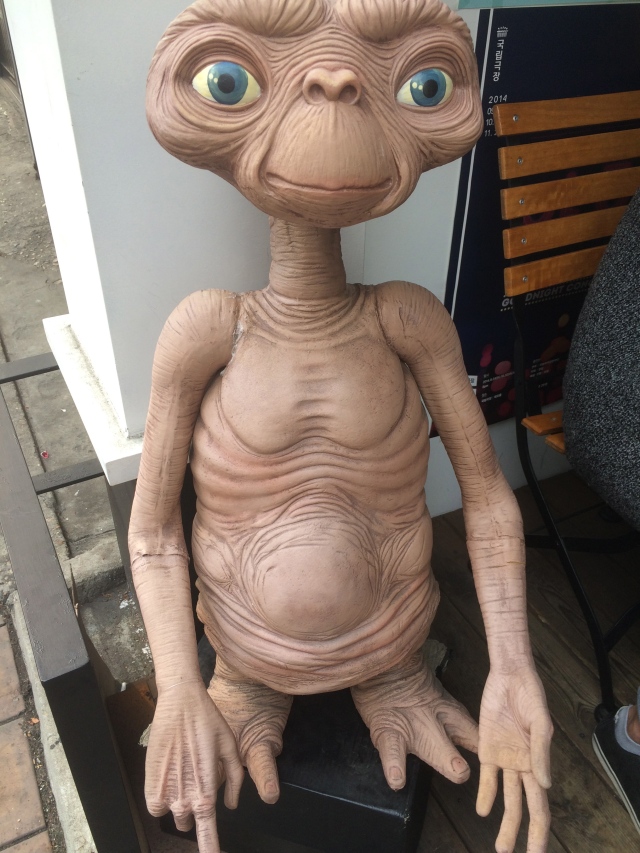 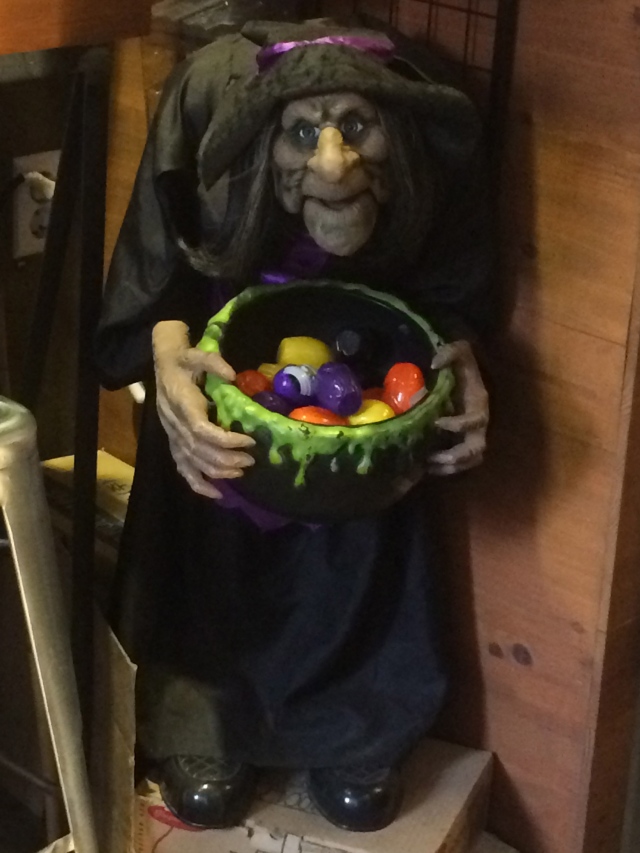 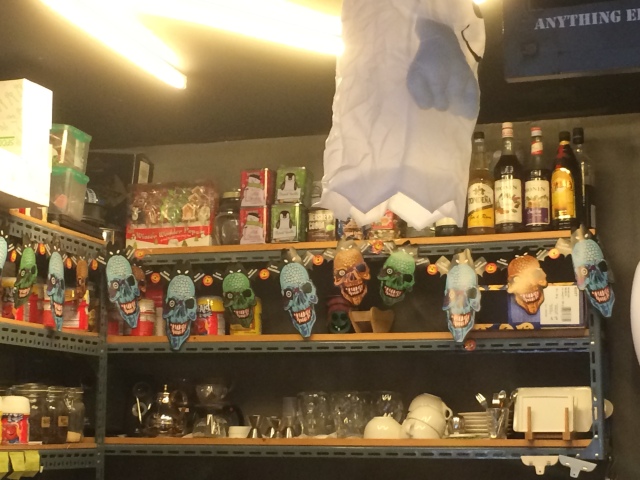 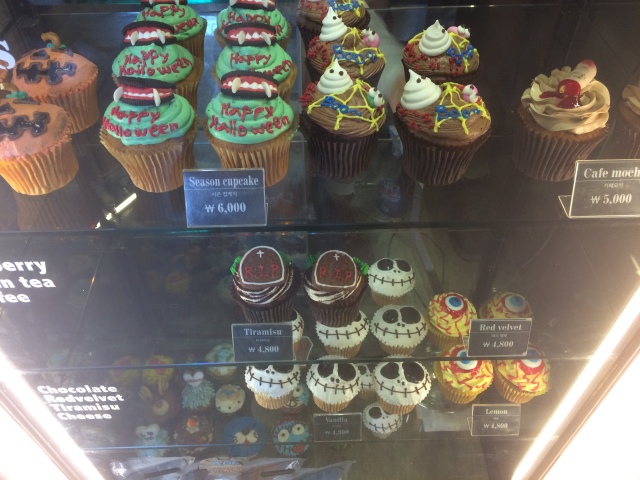 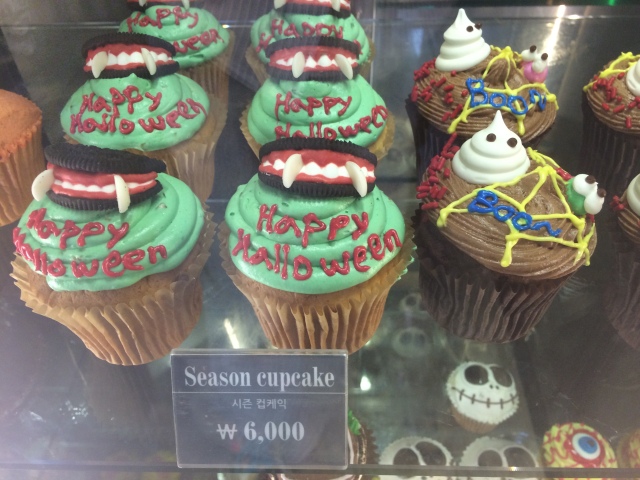 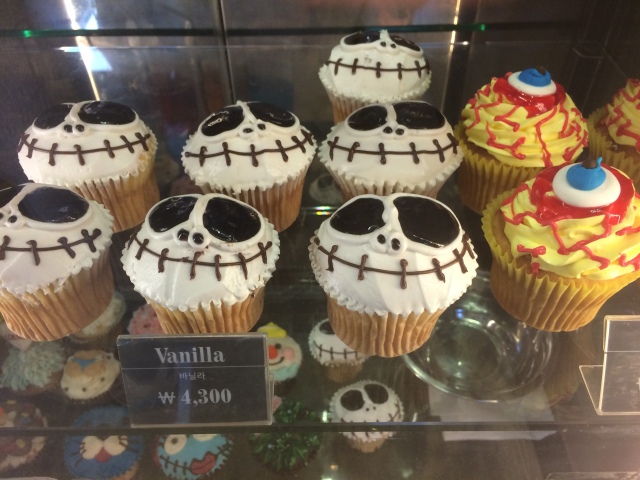 Cupcakes: Today we picked up Tiramisu, Red Velvet, Dark Chocolate and a Chocolate cupcakes. Since I was still full from Toast Monster, I decided to be a nice colleague and let my coworkers eat and do the reviews.

Tiramisu (4,800KRW): ST is a fan of two things: sweets and alcohol. Needless to say, I trust his opinion on both. He said that the cupcake was a little dry, but nothing to worry too much about. The icing was plentiful and the tiramisu flavoring was strong. He would definitely go back for another one once the insulin kicks in. 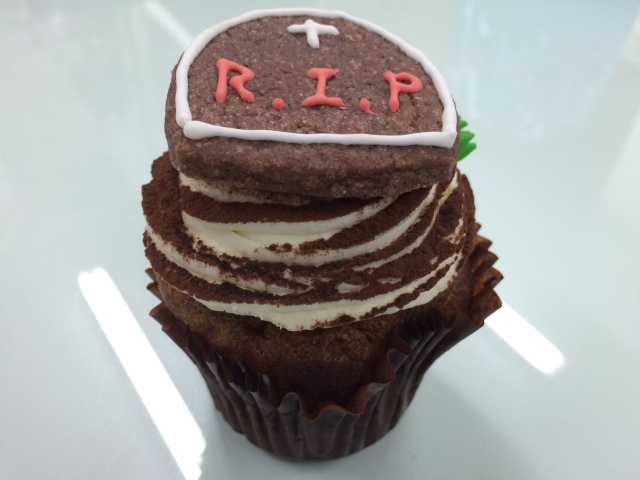 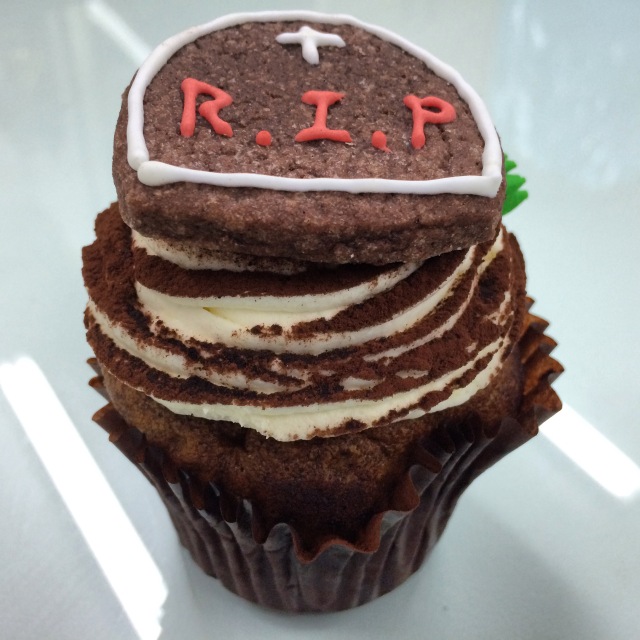 Red Velvet (Approx: 4,500KRW): Is there anything more glorious than a red velvet cupcake? KH doesn’t think so either. The icing had a lot of flavor and was very moist. The cake part could have used some more flavor. Her exact quote, “Not as vibrant as I would have thought.” 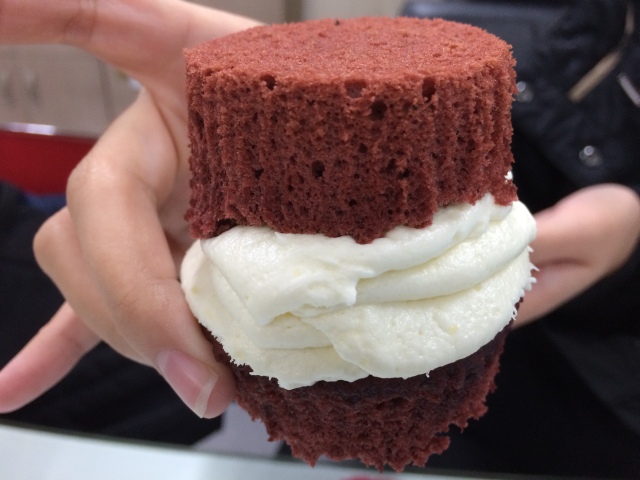 Cakewich… These kids know a thing or two. 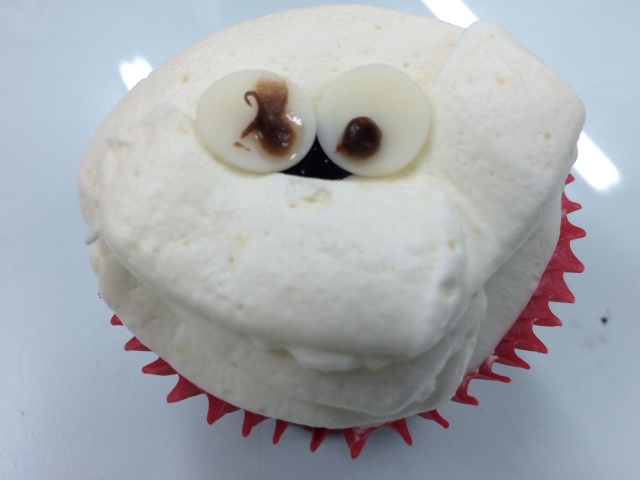 Dark Chocolate (Approx: 4,500KRW): The boss wasn’t overly thrilled with the dark chocolate cake. He said it was okay, but nothing special. The frosting tasted great and the mint complimented the cake. But once again, the cake was bland and didn’t have the liveliness of the icing. 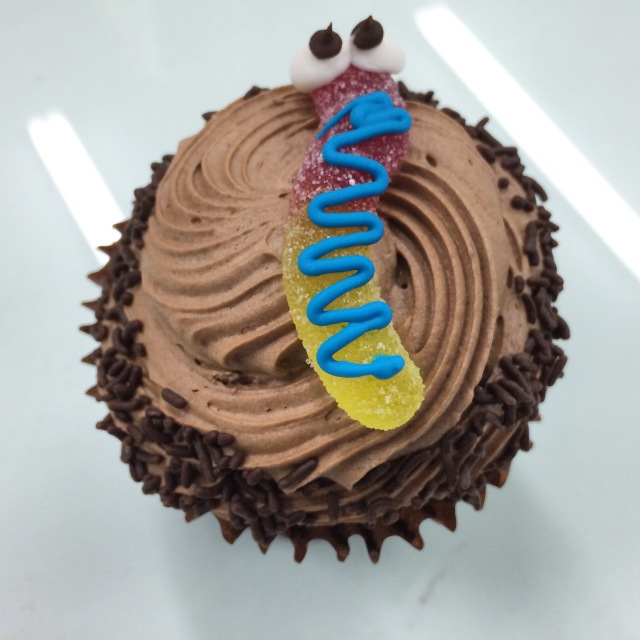 Value: The total price of four cupcakes came to approximately 21,000KRW. The cakes were good overall, but I think that most would agree that Sugar Daddy is still the undisputed champion of the Itaewon cupcake scene. With that said, if I didn’t feel like hiking up the hill to get to Itaewon, Monster Cupcake would be a very good compromise.

Who Should Visit Monster Cupcakes: Got an urge for a sweet. Don’t want to haul your ass up the hill to Sugar Daddy fat boy? Grab a box and head home. Also, avid fans of creepy cupcakes will definitely appreciate this colorful bakery.

Who Should Avoid Monster Cupcakes: If you are looking for a nice spot for a quick cake, a coffee and a chat, this might not be the place. There are only a couple of tables. Large parties of three need not apply. 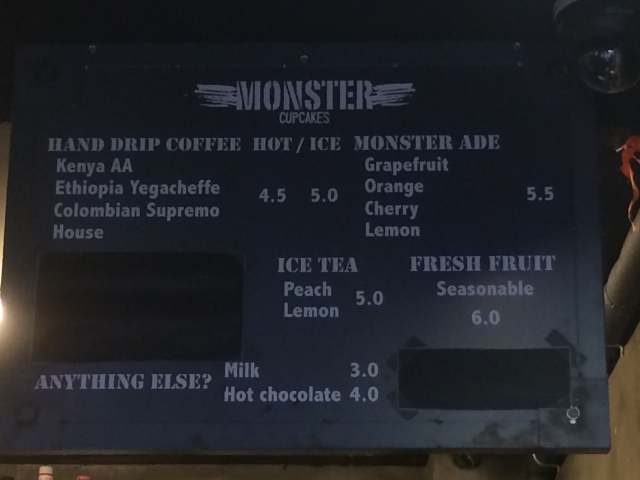