One of the many plights of living in the northern part of Seoul is oftentimes there is a serious lack of quality Western amenities. The Western brunch is such an amenity when living in Seoul. For a good brunch, one normally has to travel to Itaewon or Hongdae. You can imagine my joy when Ugly Stove, a restaurant that had originated in Hongdae, opened up on Culture Street in Nowon. We’ve been back on several occasions and they have never disappointed. 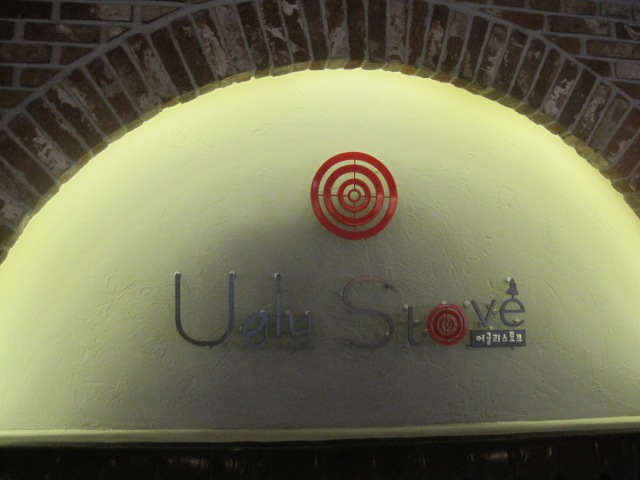 How to get there: The easiest way to get to Ugly Stove is to take Line 4 or 7 to Nowon Station and depart from Exit 4. Walk straight until you get to the second intersection after departing from the exit. You need to make a left and you should see the overhead sign welcoming you to culture street. 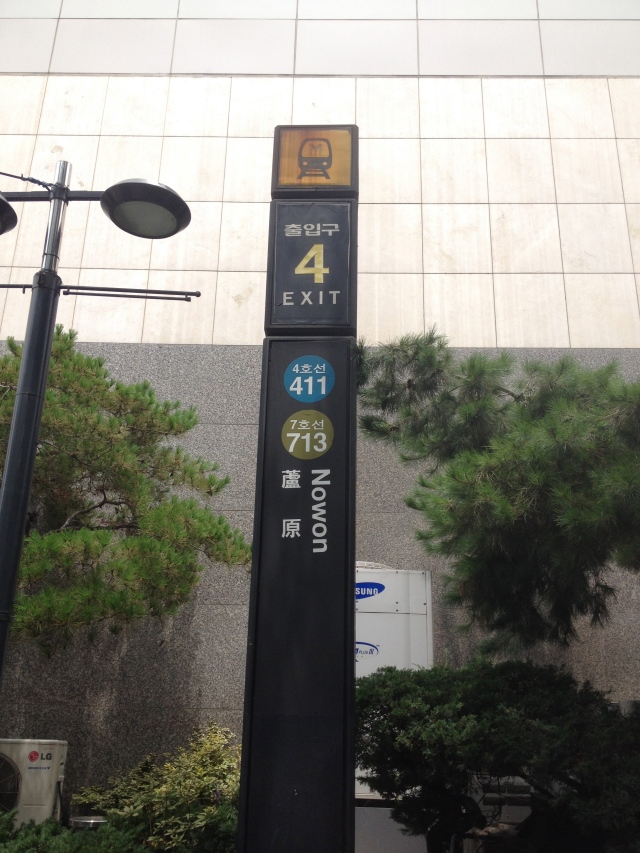 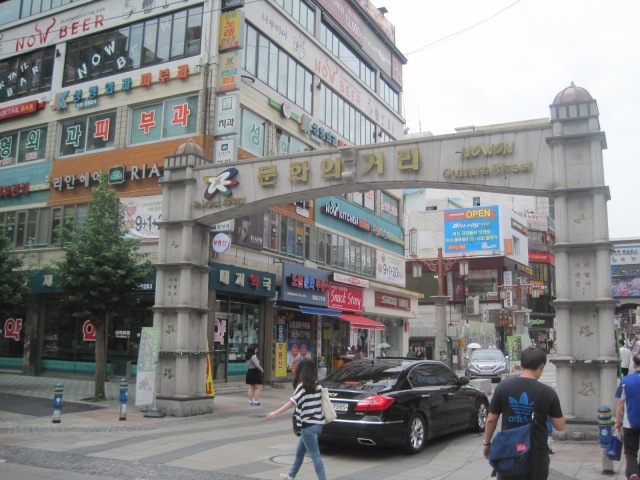 Walk into culture street and you will see a bronze statue with a creepy clown and other monstrosities. When you reach there, avoid eye contact with the statue and make a quick right. You should see the giant, outdoor stage on your right. On the left, on the third floor is Ugly Stove.

Stare into the abyss and thy soul shall be consumed.

Service and Atmosphere: Ugly Stove appears to be designed by either a farmer on an acid trip, or the farmer’s 10-year-old daughter. Fresh fruit and vegetables are on display amidst a multi-colored spotted cloth pig and pink chandeliers. Quirky, almost to the point of outlandish, Ugly Stove does not give your senses a chance to breathe. That said, despite the psychedelic interior, the restaurant itself is quite cozy providing large chairs and booths. The view is actually quite nice if you get the right spot observing the good people of Nowon bustling throughout their day from above. Service at Ugly Stove is adequate. There is nothing special about it, in fact there were a few minor annoyances. First, they were quite lazy on water refills and normally this wouldn’t bother me, but I had to ask a couple of times. On a separate occasion, the girl spoke absolutely no English. Okay, that’s fine, so we translated our order (which you have to write down) into Korean. But there was something wrong. She kept speaking to us in Korean, clearly seeing we were having difficulty understanding her. Finally, she saunters over to another table and gets a random customer to translate. The translator, who is slightly confused at this point, informs us that the server thinks we are ordering too much food…. sigh. Thank you. Goodnight. Roll credits. On the bright side, our food came out fairly promptly.

Food and Drink: This review is mainly going to cover out first visit, but multiple visits have occurred with each other being very satisfactory in terms of food quality. Check out my Instagram: derekvslp for photos from all our of visits. On our first visit, we ordered the Ham and Cheese Panini, the Ugly Plain Rosti, a slice of Red Velvet Cake and two Orange Juices. Ham and Cheese Panini (8,900KRW): The Ham and Cheese Panini arrived first. It appeared strange, with small shavings of walnuts on top of the panini, which was glazed with honey. However, Jill found the taste to be quite exceptional. The honey complimented the cheese and the saltiness of the ham. The salad was fresh, but was mostly lettuce. A little more color would have been nice.

Ugly Plain Rosti (8,900KRW): Described as a Swiss version of a potato pancake, I decided to give the rosti a try. First impression was that the rosti was huge. I had a premonition that the rosti was going to be a McDonald’s hash brown on steroids, but it was in fact, an actual potato pancake. The rosti was very light and the potatoes tasted fresh. There was very little grease. The egg was fried sunny side up and I mixed it in with a little of the pancake. It turned out surprisingly well. The sour cream was plentiful, if not excessive. The salad was fresh, but like Jill’s salad, it was dominated by lettuce. The cinnamon loaf was excellent! A warm loaf of bread, fresh out of the oven with the sticky, sweetness of a cinnamon roll. The loaf was huge and I would have paid 8,000KRW for it alone.

Red Velvet Cake (9,900KRW): Bakers around the world need to realize (and most do) that a red velvet cake does not need to be fancy. It’s the simplicity of the red velvet which gives it its appeal. For some reason, the bakers at Ugly Stove absolutely went overboard with unnecessary condiments and extras. In this collage, we saw peppero sticks, chocolate chips, blueberries, a few cherries and icing that could cover a fucking mountain. We scrapped most of it off and just ate the cake, which was actually quite good once you scrapped away the excess shit on the cake. 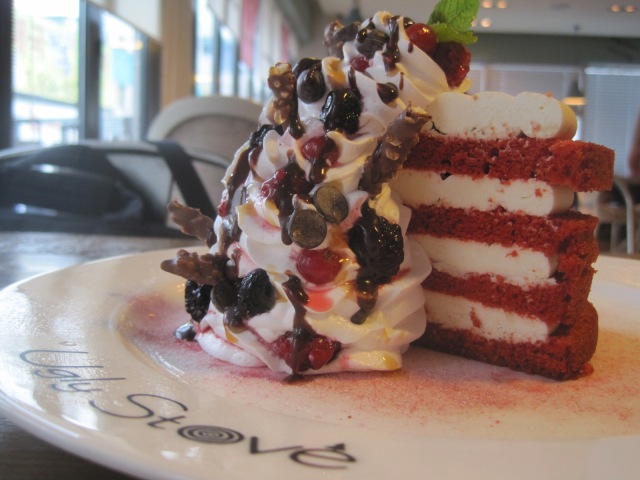 Fresh Orange Juice (5,900KRW): A glass of fresh OJ is a great way to start the day. Ugly Stove provides a large glass of OJ to satisfy your Vitamin C requirements for the day.

Value: The Ugly Plain Rosti, the Ham and Cheese Panini, a slice of Red Velvet Cake, and two Orange Juices came to approximately 39,500KRW. For 8,900KRW I found that the Rosti had the best value based on quantity. The plate was full of delicious and fresh food. The Ham and Cheese Panini was lacking a bit in value, but it was still satisfactory. If you want a cake that has a lot of bells and whistles, than the Red Velvet cake is for you, but personally I will not pay 9,900KRW for it ever again. Is Ugly Stove the best brunch place in Seoul? No. However, it is probably the best place for brunch in Nowon and I would go back again to indulge in that midmorning to midday meal. Who Should go to Ugly Stove: Kings of the north for brunch lovers in Seoul. A great place to try a rosti. I really loved it and can’t wait to go back and try the other two. Who Should Avoid Ugly Stove: Lots of great places in Hongdae (their original location) including The Honey Bowl, the current, undisputed king of brunch in Seoul. Menu: 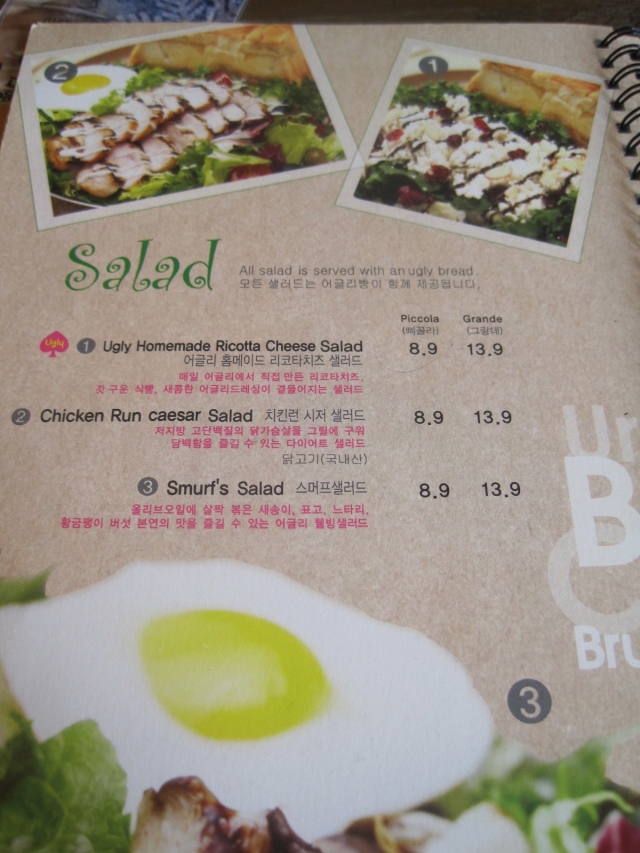 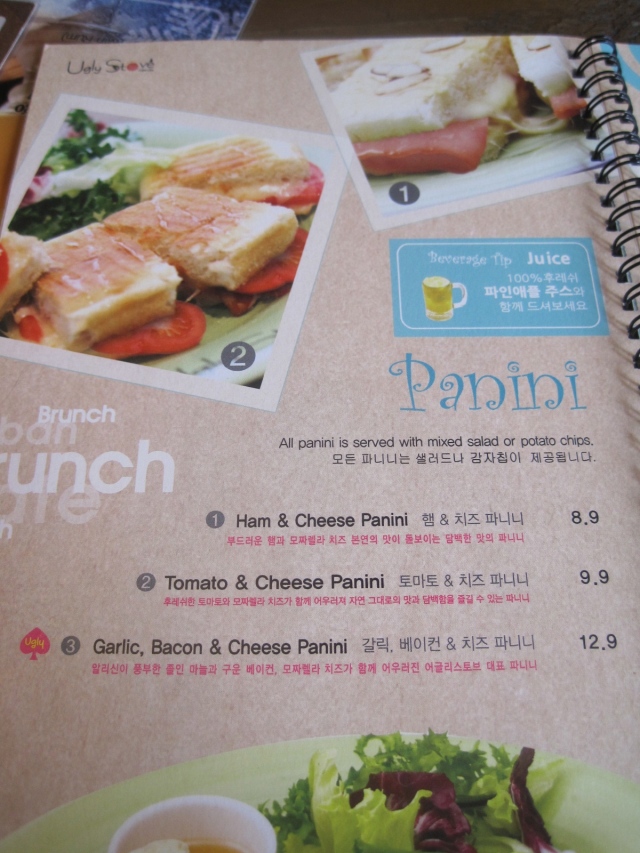 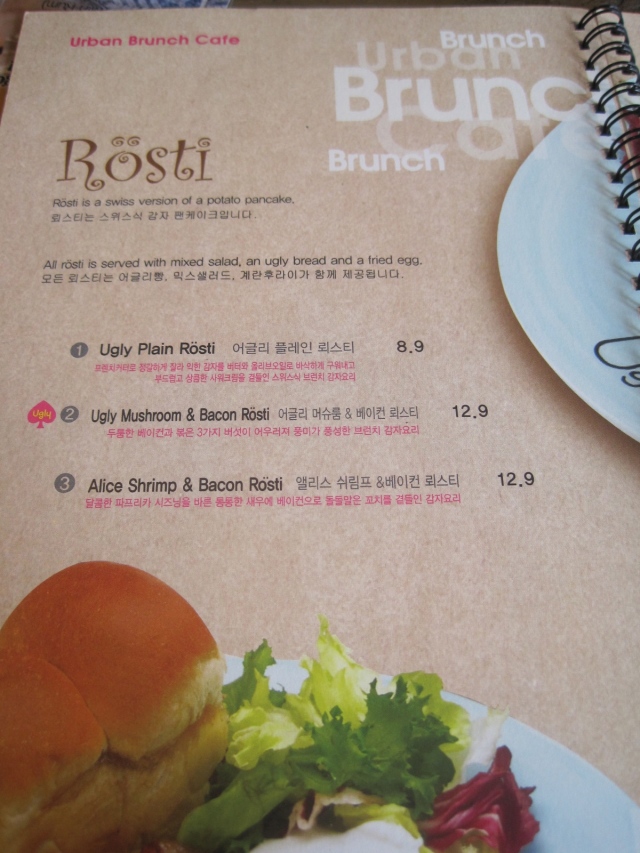 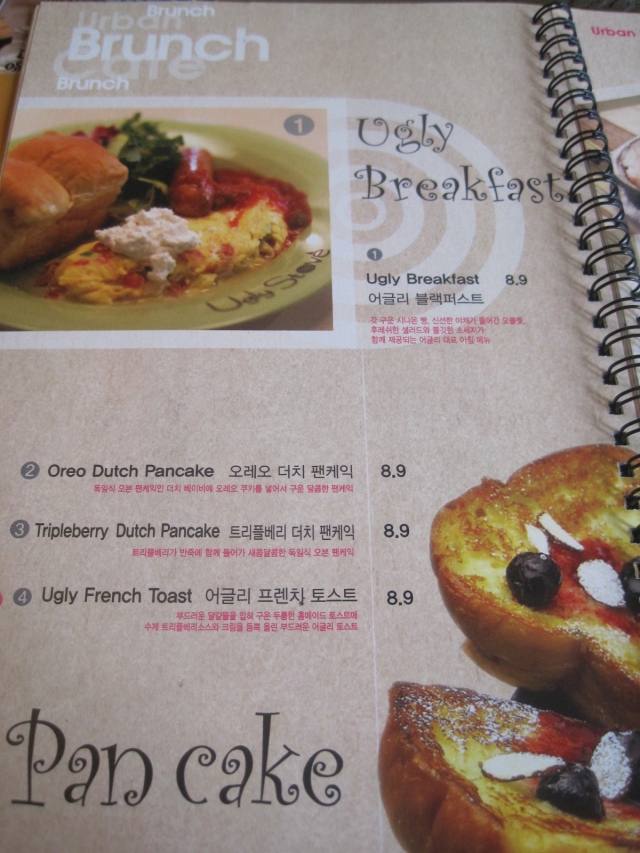 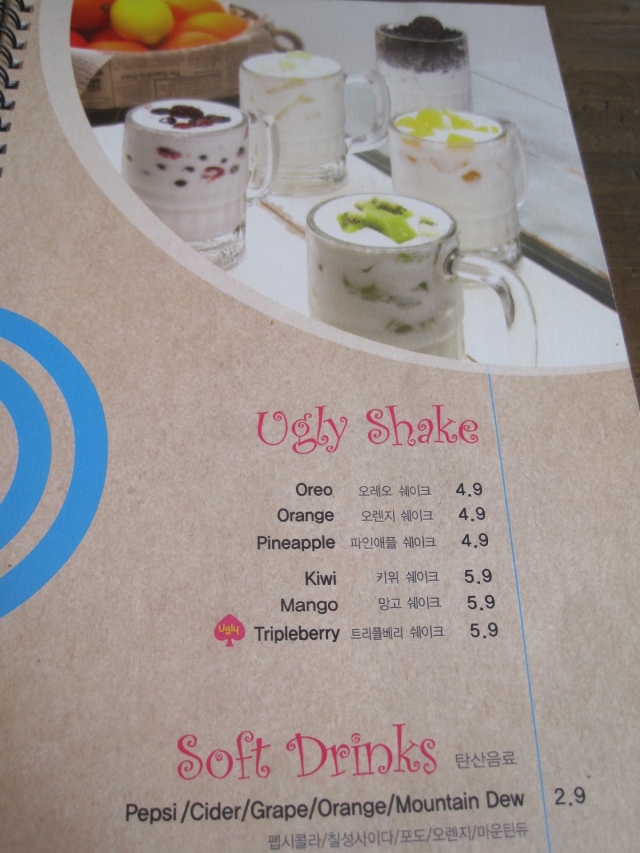 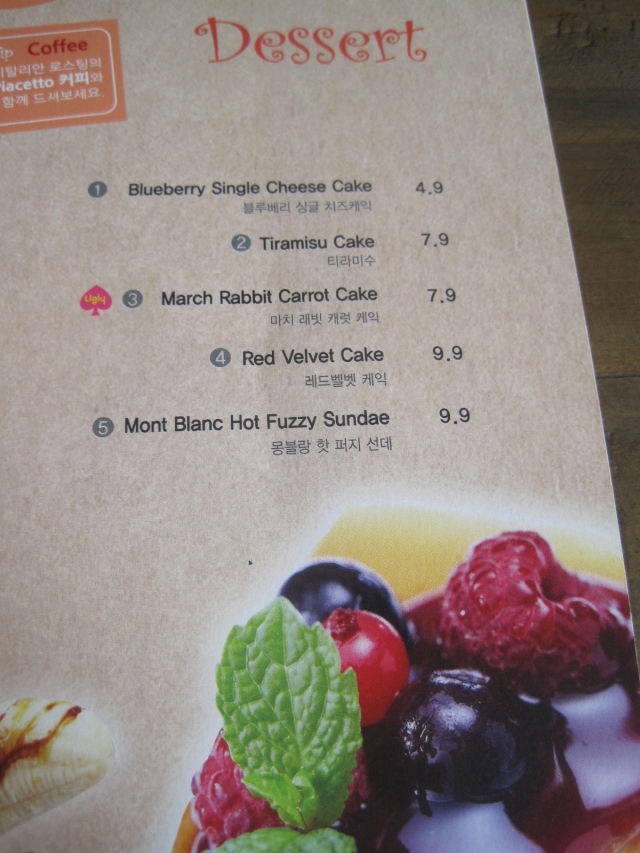